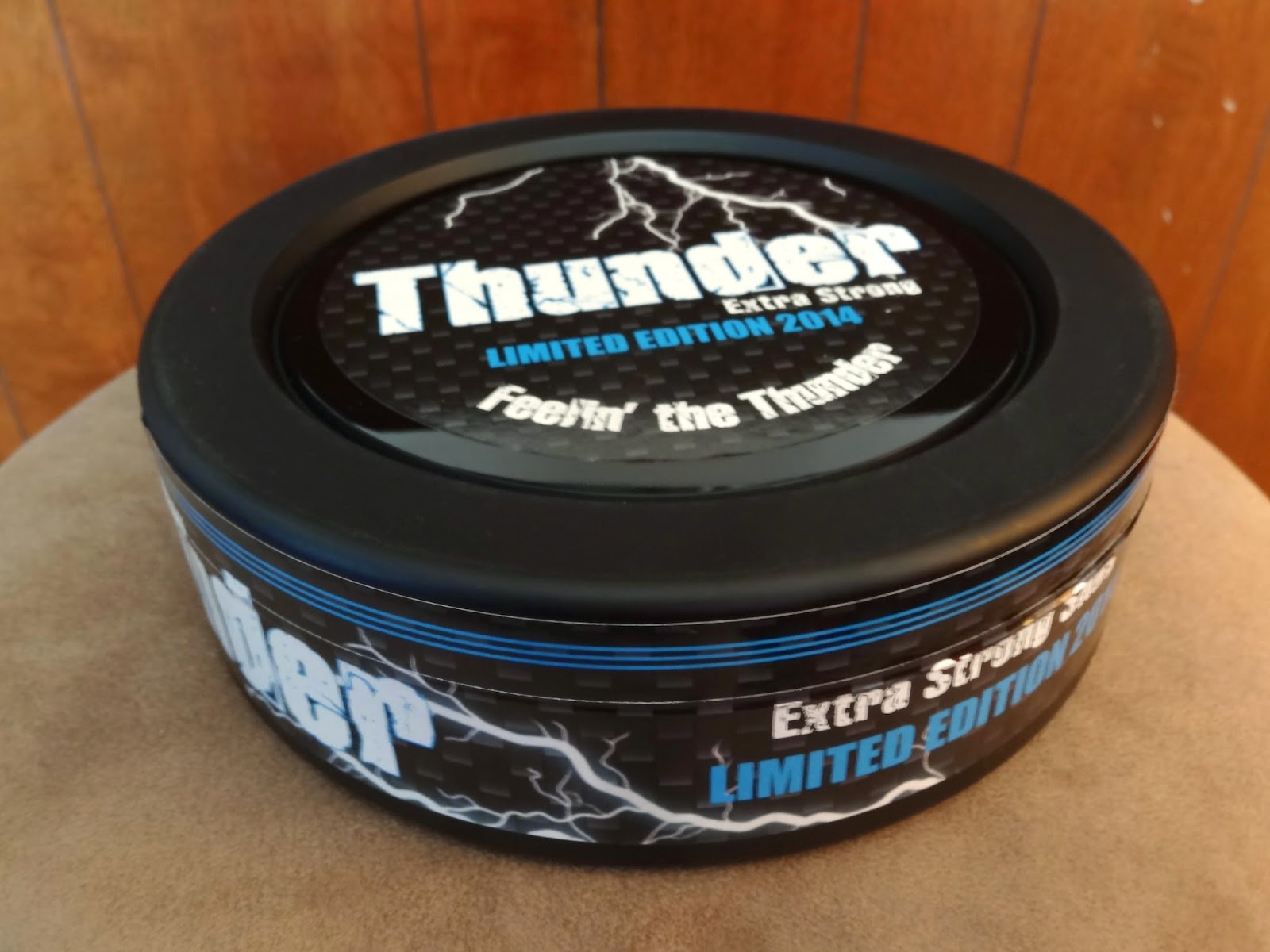 It's that time, and V2's Thunder Limited Edition 2014 is here! It's been a while since we've had a limited edition release from V2, so I've been very excited about this one. I wrote an article in the past on V2's Limited Edition products, so if you're interested in the history of what they've done before - check that out. 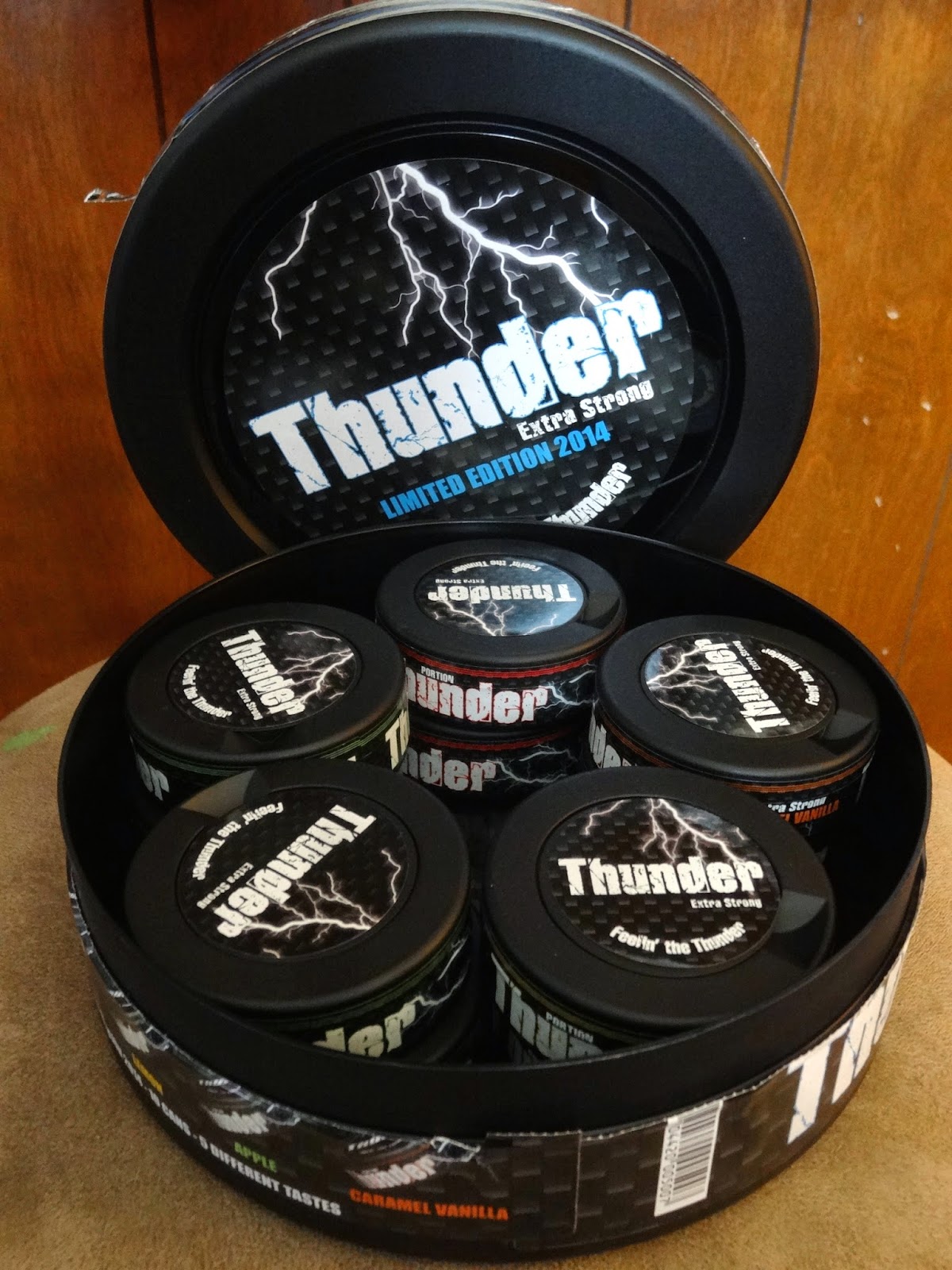 Thunder Chrome in 2011 was the last time they did a limited release, so it's been a few years. With Offroad Julesnus last year, they started doing something different. Your snus cans come in a GIANT snus can, which is pretty damn cool. I liked the tubes and tins they used to come in, but I dig this giant snus can even more.

I picked this up from BuySnus.com, and after showing up today, I tore right into it.  This year, the flavors are Lemon, Melon, Eucalyptus, Apple and Caramel Vanilla.  Lemon, Melon and Caramel are new to V2.  They've released Eucalyptus and Apple products in the past.

In the big can, you get 2 cans of each product, for a total of 10 cans all together.

In November 2014, two products were added to the full time Thunder Extra Strong line-up:  Apple and Melon.  The other five products were discontinued. 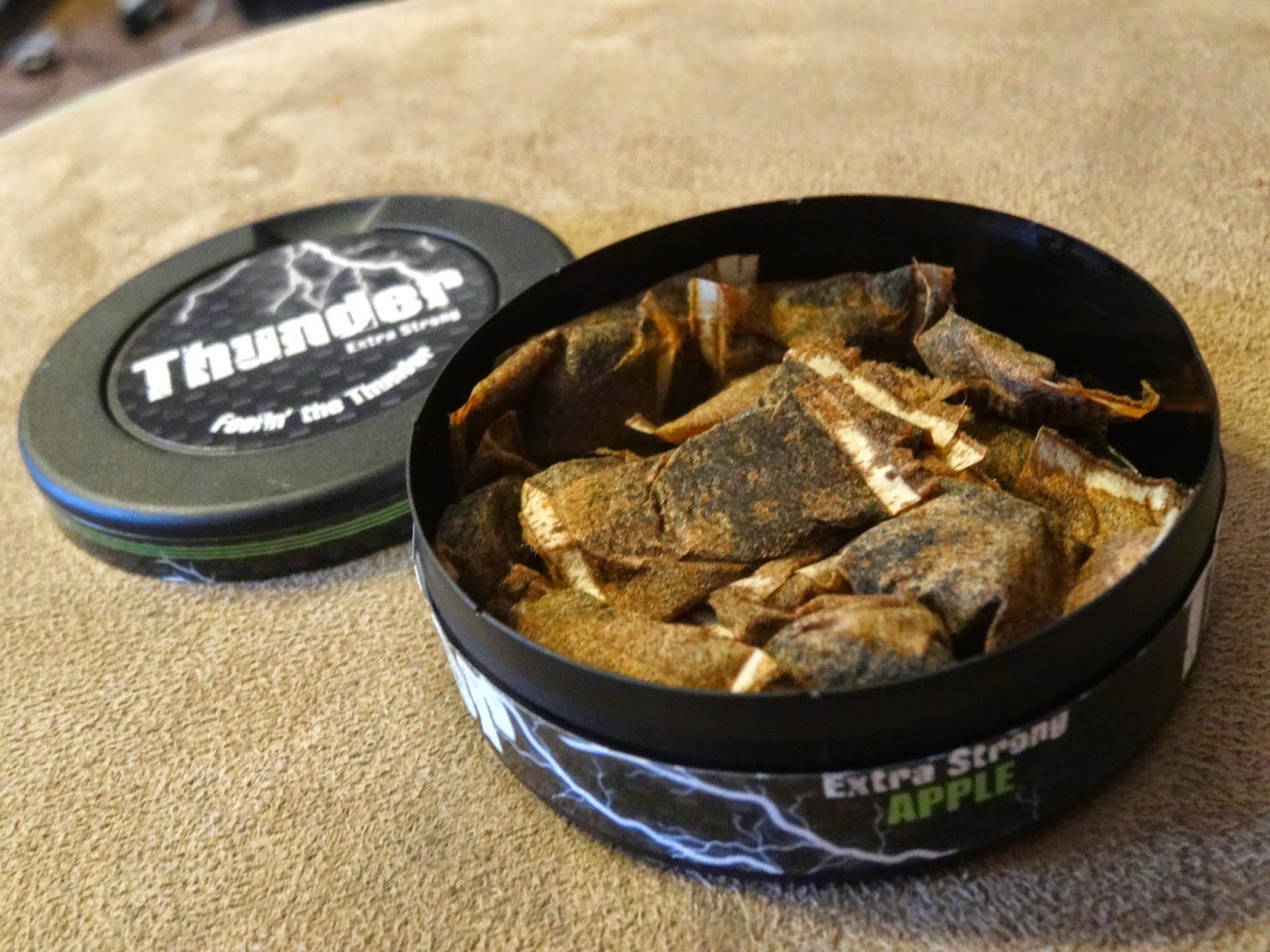 This product was released as a limited edition in June, 2014 and added to the full time Thunder product line in November, 2014.

V2 has mastered how an apple snus should taste - they do it perfectly. From their Long Cut Apple (discontinued) to the new Offroad Apple White Mini, they've definitely found the way an apple snus should taste. If you've had one of those two, this is very much the same. An aroma of fresh apple with a little nutty smell. That carries over to the great taste of this snus. It has a very bold taste of apple - it's a tad sweet, but not overbearingly sweet. The apple flavor is very natural and has a little nutty hint to it. This one is really good. If they released these on their own, I could definitely see myself buying more of this one. 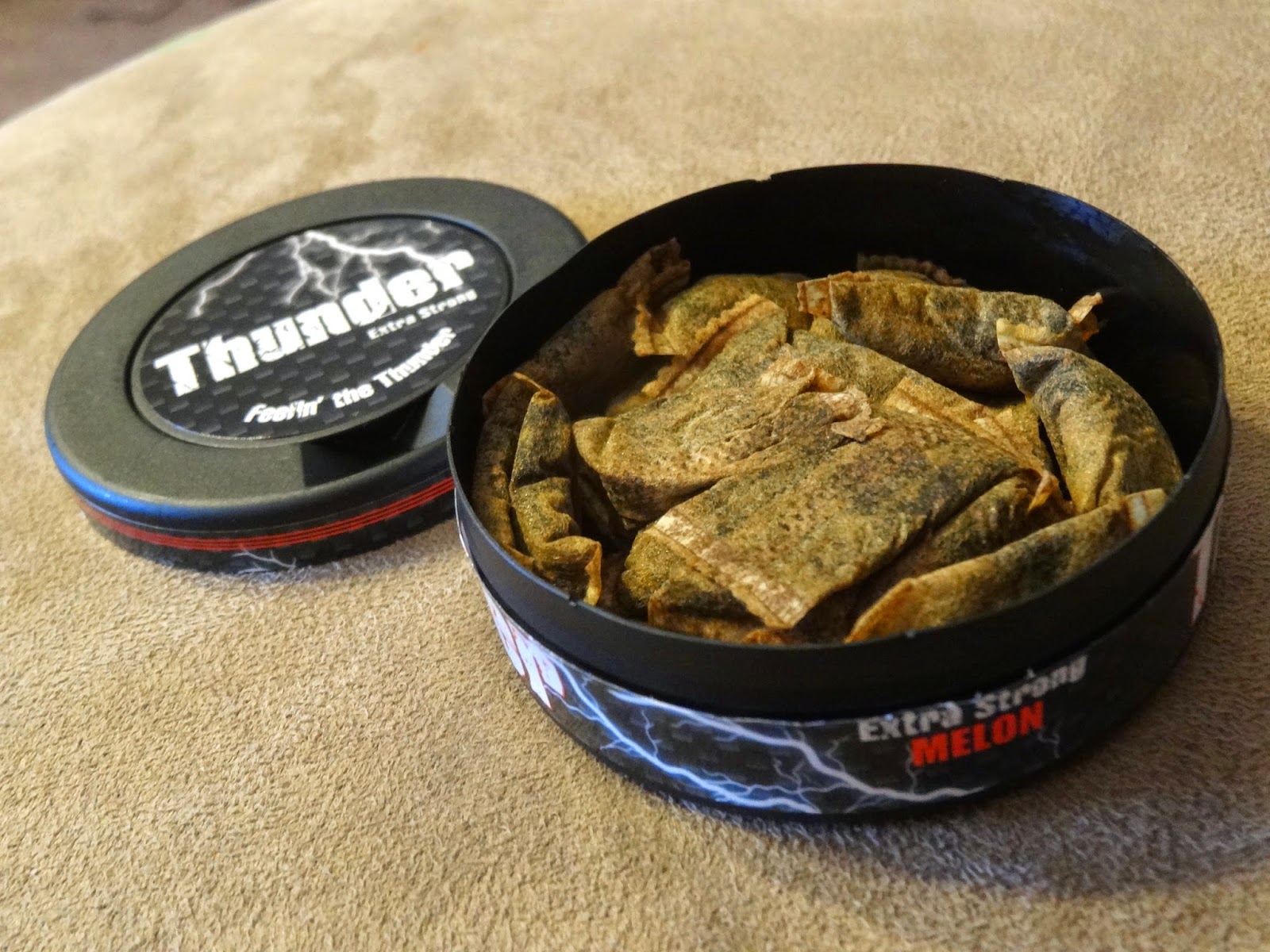 This product was released as a limited edition in June, 2014 and added to the full time Thunder product line in November, 2014.

Melon is another flavor not very common in the snus world. Olde Ving Melon and Jakobsson's Melon.  This one smells very much the same as the two I mentioned earlier, a fresh and fruity watermelon aroma.  The taste is very good, as well.  It's a fresh and fruity taste of watermelon, but it's quite natural and not too sweet.  It tastes just like taking a bite out of a piece of watermelon.  V2 definitely did a good job translating the taste of melon into this snus.  If you're into fruity snuses, you'll enjoy this one!

Part of the limited edition and later discontinued: 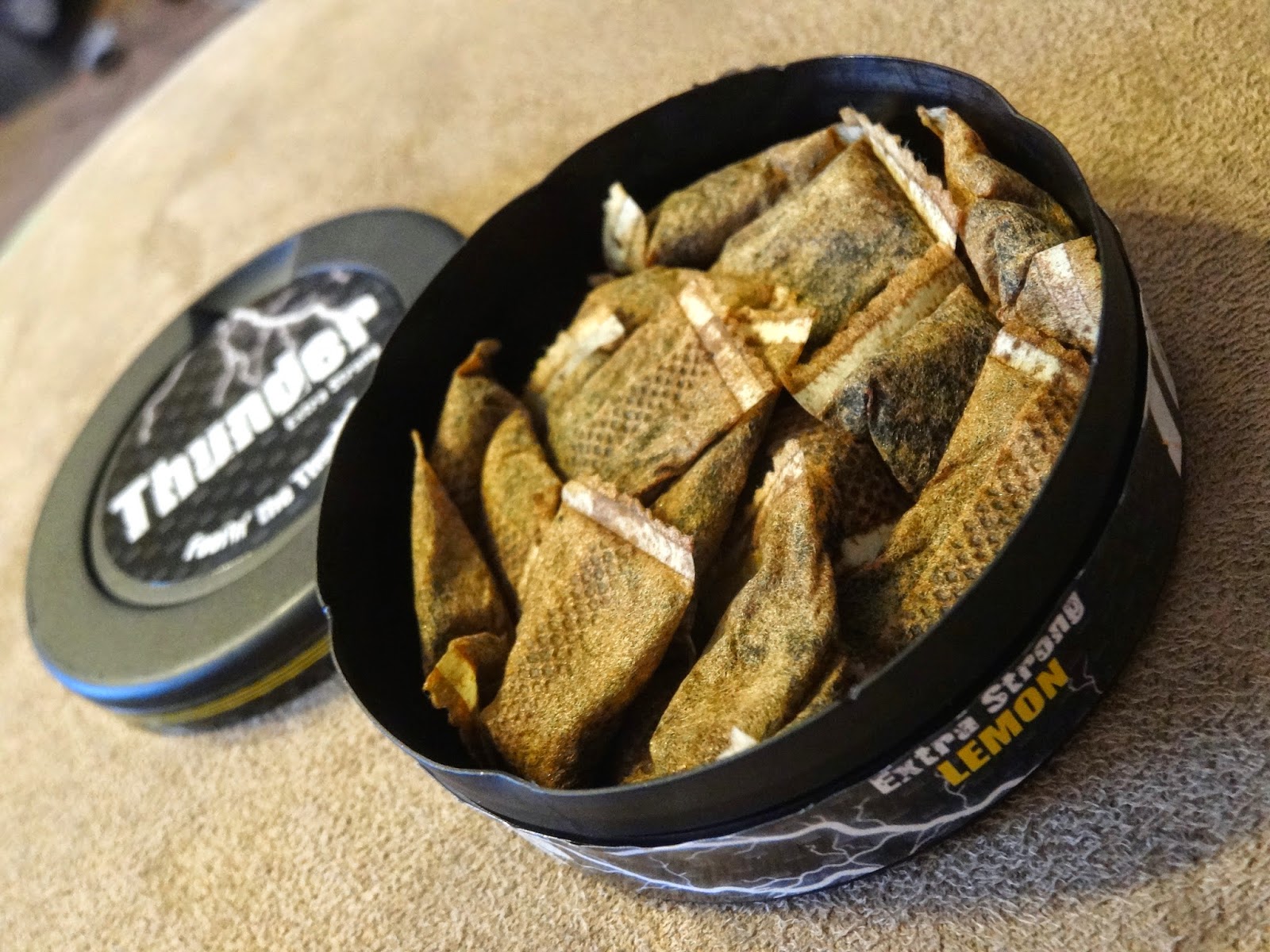 I went for lemon first, because lemon isn't a flavor common to many snus products. In fact, The Lab Fresh: Lemon was the first straight up lemon snus I've had since I started writing about snus in 2009. The aroma is a very clear and sharp smell of lemon. The flavor is much the same, a bold but tart taste of lemon with a very mild salt balance. It is, as it name says, lemon flavored.  If you're into citrus or bergamot tastes, you'll enjoy this. 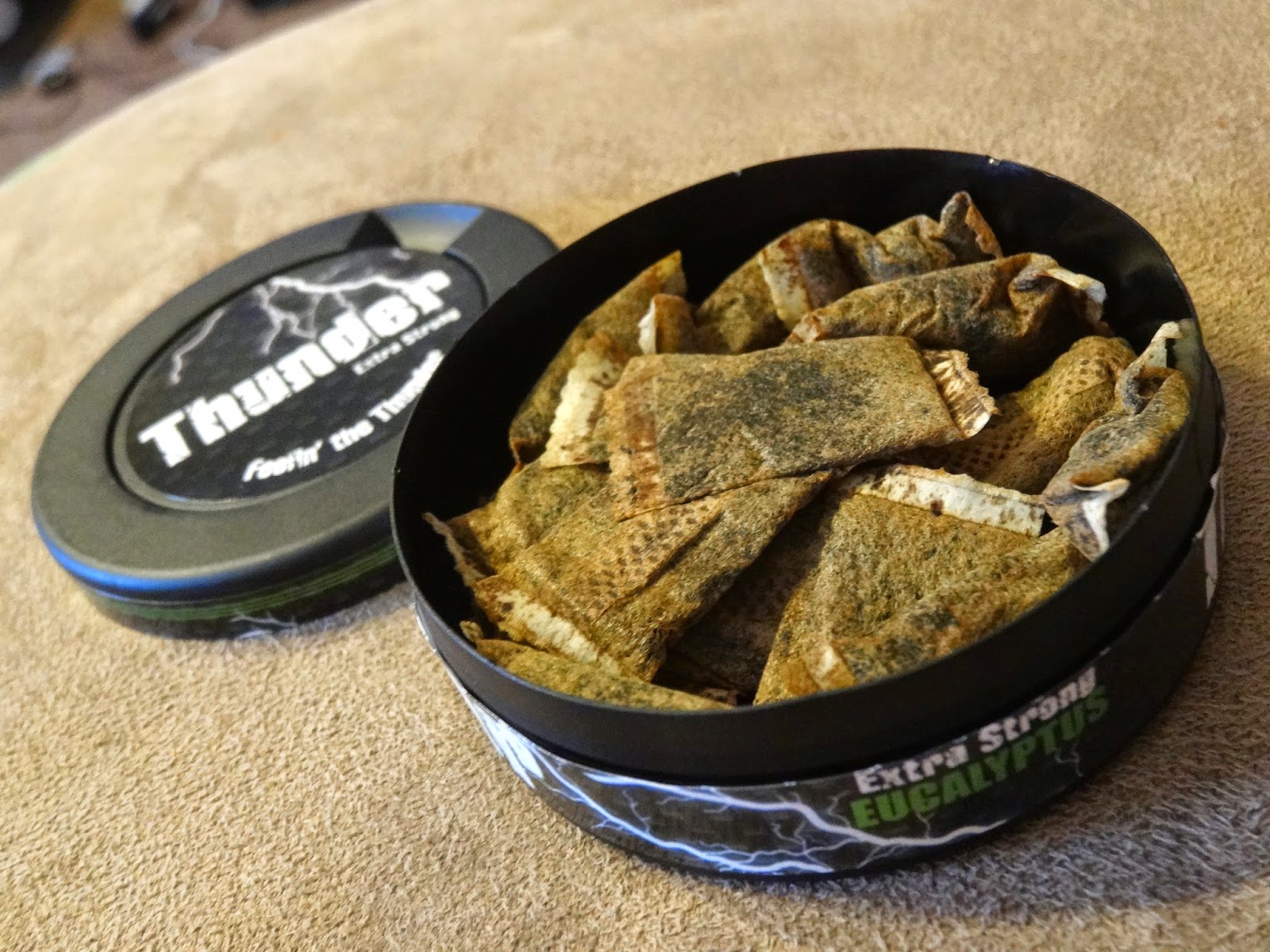 Eucalyptus isn't a very common snus flavor as well. V2 has two products already in this flavor profile, Offroad Mini Eucalyptus (formerly Fellinni Eucalyptus), and Offroad White Eucalyptus. I'll be honest, the only time I ever use a eucalyptus snus is when I have a sore throat. Usually I use Catch Eucalytpus White. This one, I think, would be good for people who like eucalyptus, or, like me, only use it when you're sick. It's the only strong portion eucalytpus on the market, as well. The aroma is a very clear eucalyptus smell, and the flavor is very much the same. A taste of eucalyptus with the cooling sensation of menthol. If you've ever had a eucalyptus/menthol cough drop, the taste is the same as that. 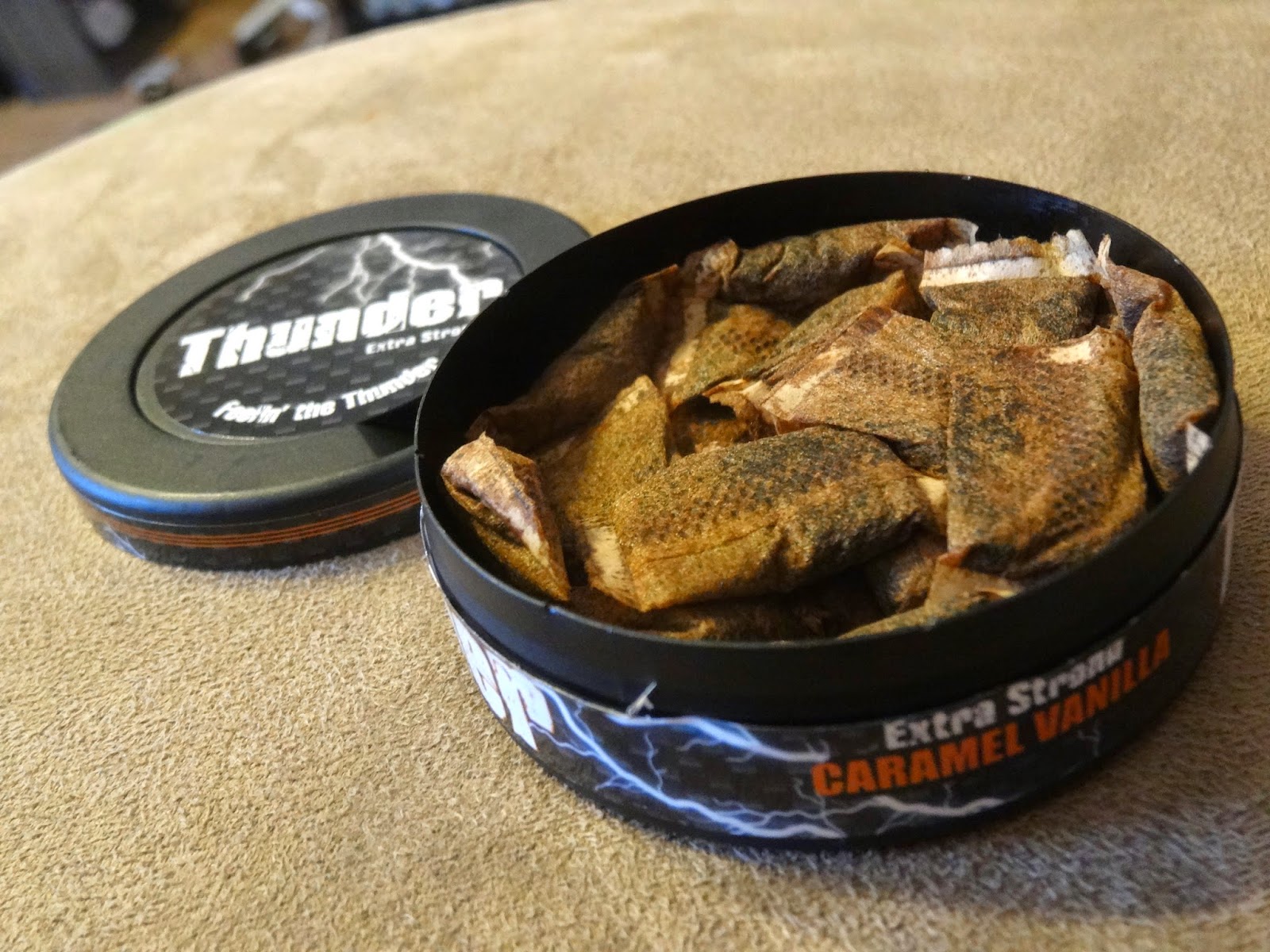 GN Tobacco has quite a few vanilla snuses on the market, but other than them not many people do it. Coffee Vanilla was V2's last "vanilla" branded snus, prior to that there was "Dark Vanilla" from the Nordstrommen Limited line in 2009. Other snus products have added hints of vanilla, but until now, no one has blended vanilla and caramel into a snus. The aroma of this one is a gentle pairing of caramel and vanilla, a little sweet but not too sweet. The flavor is fantastic. The caramel flavor is in the front and the more dominant flavor, with the vanilla mixing in gradually in the back. The two blend together to form a great flavor. This isn't something I could use all the time, but it would make a great end of the day snus, or dessert snus. Of the 5, this one was my favorite pick. All in all, the 2014 Thunder Limited line contains some great flavors - some we've had before and some we haven't. All 5 are solid flavors and I don't have any complaints about any of them. If you're into flavored snuses or just want to try something new - this is definitely one to pick up.
Posted by Chad Jones at 3:50 PM