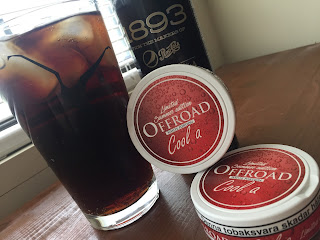 V2 Tobacco has once again brought back their Offroad Cool A (Cola) White Portion as a limited edition release for the summer of 2017! You all know I'm a big fan of cola snus - mainly because it hasn't been too well represented in the snus world. In 2007, V2 released Offroad Limited Edition 2007, which contained a cola snus. In January of 2011 they released Thunder Cola, a personal favorite of mine. They followed that release up with Offroad Cola White in April of 2011, Thunder Chrome Cola (Limited Edition) in September of 2011, Thunder Cola Los in February of 2012, and last year's release of Offroad Cool A (Cola) White Portion as a limited edition last summer. A few other manufacturers have also released cola snus products, including GN Tobacco's Oden's Cola and Gotlandssnus' Jakobsson's Special Strong Cola. I also did a poll for the makers of Epok not too long ago to see what flavor of Snus you guys wanted released, and cola won that one, too! So it's clear to see that you all love the taste of cola as much as I do. 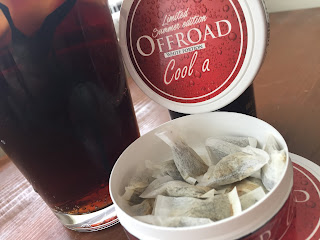 The flavor description says, "Limited summer edition 2017: Offroad Coola White Portion Snus brings you great cola snus taste in a slower running white portion and at a regular 8mg/gr of nicotine per portion. Enjoy, cola fans!" This snus comes in a 16 gram can with 20 portions, for 0.8 gram portions. The nicotine content is 8mg/g (0.8%), or 6.40mg/portion. When you open the can, the aroma that comes through is a pleasant, mild cola smell. It's not too sweet and comes through in a very gentle way. The portions are soft to the touch, but the tobacco is clumpy and centralized on one side of the pouch. I do suggest fluffing these to loosen up that tobacco and move it around. There's also a nice cooling sensation that you can feel in the lip. I'm not sure if it's from menthol or not, because I don't pick it up in the taste. The flavor as the same as last year's Offroad Cola. It's a very mellow cola taste. The taste is not too sweet, and comes through in a gentle way. I don't taste any tobacco in this product at all. The taste lasts quite a while, up to the hour mark, sometimes more! The nicotine strength feels to be about the regular level.

If you're a fan of cola flavored snus, this is a great one to try out!  Remember, it is limited, so after the summer it will be gone!  I always suggest stocking up on products you enjoy, especially limited editions, because you never know if they'll be back.
Posted by Chad Jones at 2:19 PM