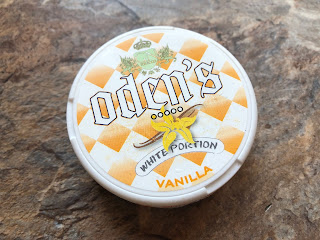 Today we're going to be reviewing a product I've wanted to review since 2016: Oden's Vanilla (White Portion) by GN Tobacco! I saw SnusMe.com stocking it, so I couldn't pass it up! I've reviewed the entire Oden's Vanilla line - the Russian version in 2011, along with the currently sold products: Vanilla Original Portion, Vanilla White Dry Portion, Vanilla Extreme Original Portion, and Vanilla Extreme White Dry Portion. This one has a different looking can, but a similar flavor!  The flavor description says it has "a taste of vanilla".  It comes in a 15g can with 15 portions for 1g portions.  The nicotine content is 9mg/g (0.9%) or 9mg/portion. 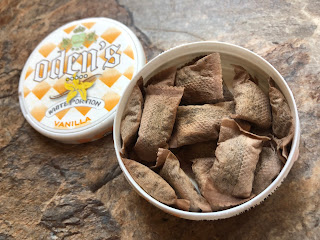 First - the elephant in the room. These do not look like white portions. I was told that it is due to the vanilla flavoring used, that the white portions look like original portions.  This snus has a really nice aroma; it's a present smell of vanilla, very natural, and lightly sweet.  The portions are pretty soft, and comfortable in the lip.  They aren't as moist as original portions, but don't feel as dry as white portions.  I find the flavor releases pretty quickly, though!  It's a  pretty gentle vanilla taste.  It's present, but not in your face.  The vanilla is quite natural tasting, and very lightly sweet in nature.  I find the flavor lasts up to about 45 minutes on average!  The nicotine strength feels to be about the regular strength level.

If you like vanilla, this is definitely one to try.  There aren't a lot of vanilla flavored products on the market, but GN Tobacco definitely nailed it with these!
Posted by Chad Jones at 5:39 PM