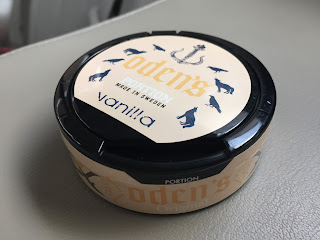 The flavor description of Oden's Vanilla (Original Portion) says, "Oden's Vanilla Portion is a new snus developed by GN Tobacco. The snus has a traditional tobacco flavor basically and vanilla that gives a sweet lovely taste." 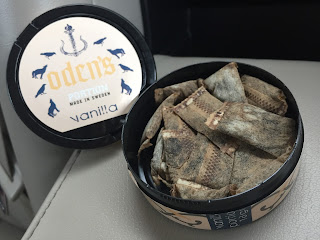 I've been leaning more towards regular strength snus lately, and it's great to see a non-strong version of Oden's Vanilla. The aroma of this one is, of course, vanilla. It's mellow, but natural. Not too sweet, which is a good thing. The taste of this one is a very mellow and natural vanilla taste - without a bunch of sweetener added to it. GN handled this one exactly the way a vanilla snus should be handled, it is perfect. The portions are very comfortable in the lip, and the flavor is spot on.  To compare it, it reminds me of Nila Wafers, which I loved as a child, and still occasionally enjoy today.  The flavor of this one is a little more rich and creamy than the white dry version, as well.  If you're a fan of vanilla, this one is a must try!
Posted by Chad Jones at 7:59 AM