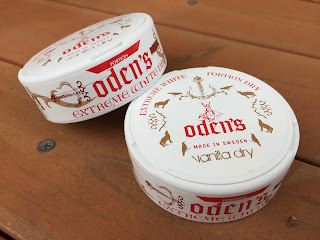 When I first spoke with GN Tobacco about this product a few months ago, I told them that I had already reviewed this product back in 2011. A friend sent me a can of Oden's Vanilla Extreme White Dry from Russia to try out. Apparently it didn't stick around long, because the person from GN Tobacco I spoke with didn't even remember that product. So, if you've had the old Vanilla Extreme White Dry in the past, this one is completely different and brand new. For this new product, GN Tobacco used vanilla oil, something they hadn't used in the past in any of their vanilla flavored snus products.  So it contributed a really nice aroma and flavor! 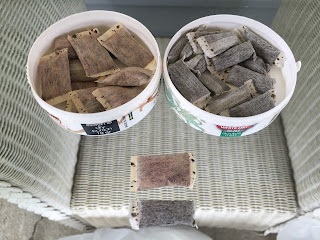 One thing that is interesting about this product is the portion itself. Looking at this photo, you'll notice that it's a little pink in appearance when compared to an Oden's white portion. I was told that this is due to the vanilla oil used in the recipe and the fact that the portion material is hydrolytic, which means it absorbs liquid faster than normal for an improved taste characteristic. So, if you notice the portion is a little pink, don't worry, that's perfectly normal! 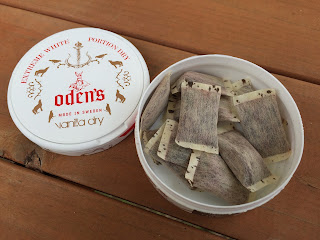 When you open the can, the aroma that comes through is an utterly beautiful, natural vanilla smell. There is definitely a noticeable difference between this and Oden's Vanilla (White Dry).  These portions are white dry, and I noticed the tobacco inside to be much dryer than the other white dry products I've had from GN Tobacco.  That does two things - in places where snus is taxed by weight, less moisture adds less weight to the can so it helps the snuser save money.  Also, the snus lasts a lot longer.  Every portion I've had so far of this snus I've been able to keep in for up to 2 hours - which is quite impressive.  The taste, however, is where this snus shines.  The pouch being hydrolytic means the portion material will have flavor almost immediately when you put it in the lip.  Being a white dry portion, the flavor does develop slowly, but you start to get flavor as soon as you put it in, which is pretty uncommon with a white dry portion!  The flavor is a very natural, gentle, mildly sweet vanilla flavor. It has a light bread-like quality to it, as well.  Comparing this to other Oden's Vanilla products, I would say that the flavor is more natural, a little more sweet, and much better tasting!  The nicotine also felt a little stronger than their Extreme White Dry products I've had in the past, it seemed to come on a lot quicker, and hit a lot stronger.

If you're a vanilla fan, this is a must try!  This is a great release and I hope that GNT starts to use this vanilla oil in all their products from now on with the vanilla taste.
Posted by Chad Jones at 2:18 PM