There's a lot of news going on in the world of snus this summer, so let's dive into it! 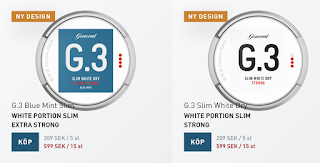 I wrote a preview a few days back about the new G3 White Dry Strong and G3 Blue Mint White Dry Extra Strong products.  But, I recently noticed on the Swedish Match website these products said "New Design".  After a little digging, I noticed I couldn't find the old G3 Strong White Portion and G3 Blue Mint Extra Strong White Portion.  I reached out to Swedish Match about this, and was told these new white dry products would be replacing those white portion products. 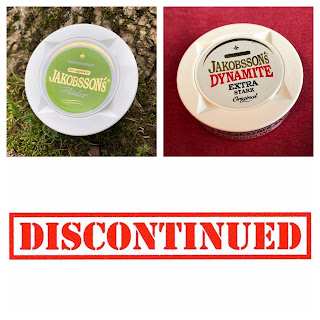 I was speaking with Gotlandssnus yesterday, and was informed of some sad news.  Jakobsson's Dynamite and Jakobsson's Flader are being discontinued due to low sales volume.  I didn't really use Dynamite much, but Flader was a sad one for me.  Back when I first started using snus in 2009, Flader was a personal favorite and has been ever since.  If you like these products, make sure and buy them from your favorite store or webstore - once they're gone, they're gone forever. 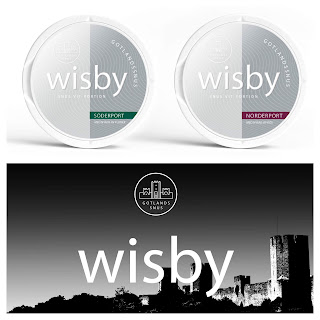 Gotlandssnus is releasing a new product line called Wisby.  I see on Snusbolaget.se they're priced at 31kr-33kr, so it looks like they're designed to compete in that value priced segment. This is how they describe the new line: "At Gotlandssnus, we love our origin. Getting to Visby is an experience, here you will find old and genuinely well preserved, narrow alleys inside the ring wall. Many people have a relationship with the city and memories from here, regardless of the season. The snus saw Wisby is our tribute to the Visby gate to Gotland and also to our hearts."  Wisby Norderport is described as having a "clear tobacco character with a hint of rosehip." Wisby Söderport is described as having a "clear tobacco character with a hint of fläder".  It appears as though the flavor of Jakobsson's Fläder will live on!  Both of these products come in a white portion, which is a first for Gotlandssnus as they mostly release original portions.  According to the Gotlandssnus website, each can weighs 18g with 0.9g portions, and a nicotine strength of 14mg/g. 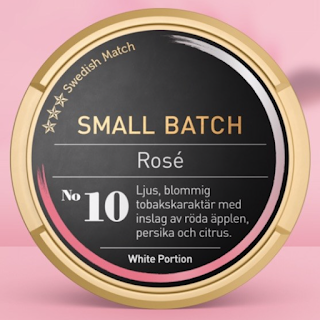 Swedish Match has announced the next release in their Small Batch series, No10 is called Rosé! Last summer, Swedish Match released a limited edition Rosé snus that I never got to try, so I'm excited to check this one out. It was originally made for Almedal Week, and is a big political festival in Sweden. With a rose smell, they were trying to catch the politicians' attention and lobby to remove the "unfair export ban for snus to the EU”, according to Patrik Strömer, Secretary General of the Swedish Snus Manufacturer. Swedish Match describes this product as "inspired by flavors and aromas that can almost be likened to the classic pink rosé wine from Provence. The main character consists of a crisp, light bitter and refreshing citrus with tones of peach, red apples and a finely tuned floral presence, complemented by a light aromatic tobacco."  This one looks to come in the white portion format, and will come in a 24g can with 24 portions. 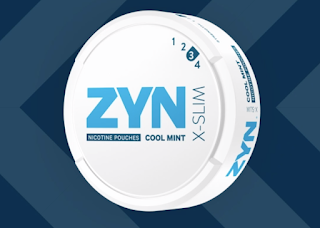 A few days ago, I wrote about the new G4 Tact SuperSlim, and all white/white tobacco product.  It appears as though Swedish Match is continuing the SuperSlim all white trend and releasing a version of Zyn called X-Slim, which comes in the SuperSlim format.  This is a product for the Swedish market, so it doesn't look like it will be available to the US.  This one is said to have an "intense but soft peppermint and biting, cooling aftertaste".  It has a nicotine strength of 14mg/g. 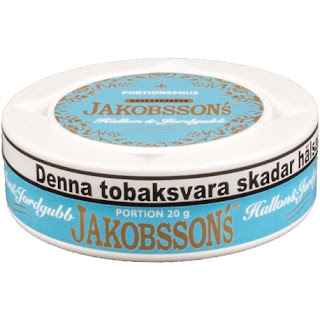 Gotlandssnus has releases their Summer 2019 Snus, Jakobsson's Hallon and Jordgubb!  This has a flavor of "wild strawberry and raspberry". If you've never had it before, I did a text review of it back in 2017 and a video review of it as well.  This one is a great summer release, and one I enjoy every year whenever the weather starts warming up.  Usually it's only available for a few months, so if this is a favorite of yours make sure and stock up on it! 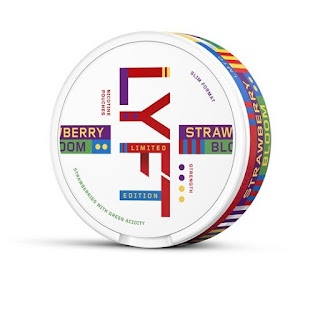 I saw this one on Snusbolaget.se and was really intrigued.  Lyft has released their first limited edition, summer flavored product!  This one looks like it comes in a regular can, as well, not the usual Lyft can.  Unfortunately, from what I've heard, it's only available in Sweden, so I'm not sure if I'll get to review this one or not.  Snusbolaget says this one has a "sweet taste of strawberry".  The nicotine strength is listed there as 8mg/g, and it is, as other Lyft products are, a nicotine pouch product.  Meaning, it has nicotine but no tobacco.  If you're in Sweden, this one sounds like a good taste for the summer!
Posted by Chad Jones at 9:55 AM