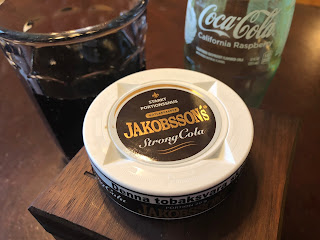 The product description says, "The new Jakobsson's Strong Specialty Cola has a clear taste of Cola with some sweetness and hints of citrus."  This product comes in a 20 gram can with 20 portions, meaning 1 gram portions.  The nicotine content is 1.4%, or 14mg/g.  With 1 gram portions that comes out to 14mg/portion. 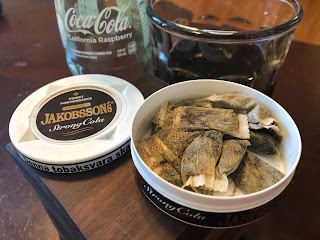 I was really excited when I heard about this snus. I love cola flavored snus. When Thunder Cola was discontinued, it left a pretty big hole in my heart. Since Oden's Kola isn't easy for us to get in the US, I haven't had a good cola snus in a while.

The first thing I want to mention about this product is the portions.  These don't feel like any Jakobsson's portions I've had in the past.  They are extremely soft and silky to the touch.  It feels as though it is a completely different portion material.  They are also more moist than most Jakobsson's portions I've had in the past.  When you open then can, the aroma that comes through is a mildly sweet cola smell.  The smell isn't overly sweet, nor is it overly artificial.  The portions feel absolutely sublime in the lip.  Not only are they soft to the touch, but they feel quite soft in the lip as well!  I noticed the flavor description mentioned citrus, but I didn't detect it in the flavor, nor did I detect it in the aroma.  If you've ever had Thunder Cola in the past, the flavor reminds me of that, but it's a little less sweet.  The flavor is a present and straightforward cola taste.  It has a touch of sweetness to it, but it isn't overdone and it complements the cola flavor quite well!  I mentioned earlier than the nicotine strength is 14mg/g, however it doesn't feel too strong.  I do notice it to be stronger than a regular strength snus, but it's not too strong.  The flavor lasts a good amount of time as well.  It mellows out at around the 30 minute mark, but the cola taste kicks around for 45 minutes to an hour.

This snus won't be for everybody.  If you're not a fan of sweeter tasting snus, you may not dig this one.  But if you like cola flavored snus, this is an absolute must try.
Posted by Chad Jones at 3:59 PM