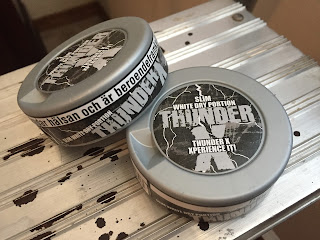 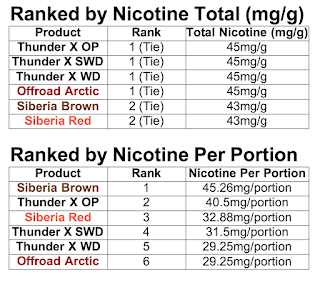 Now, let's talk more about the nicotine.  I made this chart that compares the "on paper" aspects of the "world's strongest snus" products.  I wanted to compare them in two ways - total nicotine and nicotine per portion.  If you rank by total nicotine, on paper the new Thunder X products are the strongest in the world.  If you rank by nicotine per portion, Siberia Brown still has the crown and Thunder X falls in behind it.  As I've mentioned before, "on paper" nicotine levels aren't the only things to consider.  You have to look at types of tobacco used, free nicotine levels (the amount of nicotine actually usable) and pH, which affects the nicotine absorption, as well.  So one snus may be stronger than another on paper, but the weaker snus may "feel" stronger due to various factors.  That's where things get interesting.  With this one, it's ranked #4 on the nicotine per portion strength level, at 31.5mg per portion.  But, to me it feels much stronger. 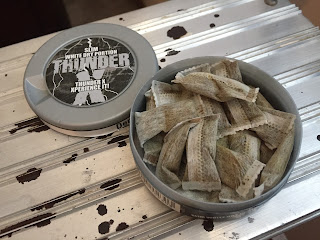 This snus reminds me a lot of Thunder Cool Mint Ultra Strong (White Dry). The aroma is a sweet, mellow and smooth smell of peppermint. The portion are slim and very comfortable in the lip. Even though they are of the white dry format, the dryness of the portion doesn't take away from the comfort. When you put a portion in, you encounter an immediate cooling and burning sensation. Much like Thunder X Original Portion, the burn and cooling sensation comes on almost immediately and is quite strong!  The flavor, however, is more mild.  It is a smooth and mellow taste of peppermint, a little tobacco in the background, a light hint of chocolate and a little salt.  I don't notice as much peppery taste with this one as I noticed with the original portion.  With this one, I noticed I felt the nicotine a little later than the original portion, at around the 4 minute, 11 second mark.  However, that is still incredibly fast for a white dry portion.  I initially kept these portions in for up to 10 minutes, 5 seconds.  The longer I used it, the longer I kept them in; up to almost 15 minutes.  But, I really couldn't go over that.  This stuff is incredibly strong.

If you're looking for a slim portion mint snus with an insane amount of nicotine, I'd suggest giving this one a try.  It is incredibly strong!  It's not something I would ever use again, but for the nicotine junkies of the world - this may be right up your alley!
Posted by Chad Jones at 6:37 PM