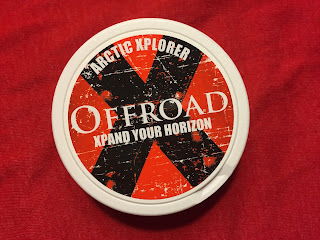 NOTE:  This is the old review - here's the new one.

Over the past 7 years, it's been interesting to watch this race to create the world's strongest snus. When I first started snus back in 2009, there weren't many strong snuses of note. The most popular ones were Nick and Johnny, General Ekstra Sterk and Thunder Frosted Extra Strong. But over the past several years, it seems more and more that the market has been focusing on stronger snus. It seems like this race really amped up in 2011 when GN Tobacco burst onto the scene and released Oden's Extreme Portion. And GN Tobacco also holds the title for world's strongest snus with Siberia Red White Dry (Extremely Strong) at 43mg/g of nicotine. Now, enter Offroad Arctic Xplorer weighing in at 45mg/g. Is it the world's new strongest snus? Yes and no. We'll examine that further. 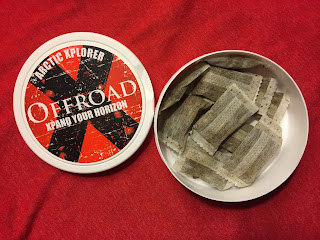 The flavor description describes this snus as, "Offroad X White Dry is the first ultra strong snus made for the Offroad brand boasting a nicotine level of 4.5%!! This is not recommended as a bed time snus. Offroad X White Dry Portion Snus: after 4.5% nicotine, what is there left to say? Oh, the flavor! It's a spearment/menthol blend we think."  This snus is a white dry portion, which means it's going to be a little dryer than your average white portion.  The flavor will develop a little slower, but last a lot longer, which is a benefit of the white dry format.  When you open the can, the aroma that comes through is a very sharp, stinging smell of mint.  The mint aroma seems closer to the peppermint side of things and appears to perhaps have a little menthol presence.  When I put a portion in, I noticed a burn which lasted for a few minutes and then subsided to a cooling presence.  When I reviewed this snus, I used a timer to see how quick the nicotine hits and how long I could keep a pouch in.  The nicotine usually hits me at around the 5 to 6 minute mark, and I've been able to keep a portion in at most for 18 to 20 minutes.  I don't use a lot of strong snus, so it takes me a while to review these super strong products.  The flavor with this one is more of a sharp, focused mint flavor that reminds me mostly of peppermint but with a light touch of menthol in the background.  I also notice a mild tobacco character, as well.

Now, to do a comparison between this one and Siberia, I would say the main difference I notice is that with Siberia the nicotine kick is stronger and more focused.  With the Offroad X I would say that the nicotine kick is still quite strong, but develops slower and doesn't hit you all up front.  This product isn't something I would use - I'm not a big fan of strong snus.  But I imagine nicotine extremists out there are going to love this one!
Posted by Chad Jones at 5:09 PM