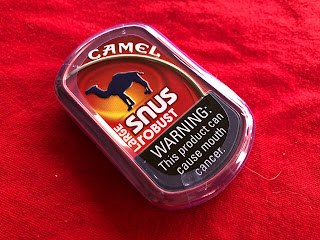 Disclaimer: I do not consider Camel "SNUS" to be real snus.  I wrote this article about the differences between American "snus" and real Swedish Snus, so please check that out.  Also, I put "SNUS" in quotation marks because I do not consider this product to be actual snus.

That being said, I'm going to review Camel Robust "SNUS" today.  This product has been around for a while now, but in the spirit of completion, I have to review this so I can say that I did.  I do it for you guys - it's not something I want to do, but I want it out there.  Plus, people looking for info on Camel Mint "SNUS" will find this article and I can hopefully convince them to switch to REAL Swedish Snus.  Though I’m not a fan of American “SNUS”, I have reviewed all of the flavors of Camel “SNUS” - Frost (Regular Size), Frost (Large Size), Mellow, Robust, Winterchill and Mint.

The flavor description for Camel "SNUS" Robust says, " Camel Large Robust Snus has a rich flavor of tobacco with hints of spices and sweetness. This snus has a larger pouch."  This product comes in a 15 gram can with 15 portions for 1.0 gram portions.  The nicotine content, according to a BMJ study, is 2.6mg/portion. 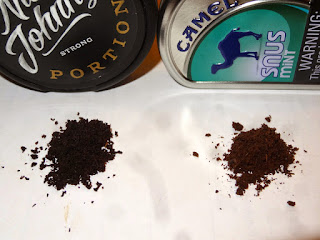 To compare Camel "SNUS" to real Swedish Snus. I wanted to open a portion of each and show you the tobacco quality.  As you can see, the Swedish Snus pictured on the left is of much higher quality than the American "snus" pictured to the right.  Now, this may not matter to some, but to me this is something important.  When I use a snus product I want to use one that has high quality ingredients, and this is where Camel falls short.  Camel "SNUS" also falls short in terms of flavor, longevity, and nicotine strength when compared to real Swedish Snus as well.  But more on that later. 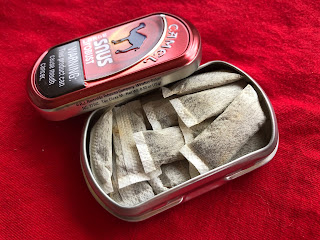 When you open a can of Camel "SNUS" Robust,  the aroma is a really sweet smell with a hint of pepper.  It seems to be tobacco centric, but smells like cheap tobacco.  The portions are long, slim, and comfortable in the lip.  However, they are a little on the dry side.  The flavor is much like the aroma and reminds me a lot of sweet tea.  It's an overly sweet, cheap tobacco taste with a touch of pepper in the background.  The nicotine strength is virtually nonexistent.  As far as the longevity goes, I honestly can't keep these in too long.  It's too sweet, and if I keep it in too long the aftertaste is rather unpleasant.  The only positive thing I can say about this one is that it's probably the best product in the Camel "SNUS" lineup, but that's not saying much,.

If you want to quit smoking with snus, I suggest buying some real snus locally first - hit up the store locators for General Snus or Thunder Xtreme to try real snus out.  If you want a bigger variety, you can always buy online and have access to hundreds of real Swedish Snus products!
Posted by Chad Jones at 11:57 PM

Email ThisBlogThis!Share to TwitterShare to FacebookShare to Pinterest
Labels: CamelSnusUSA