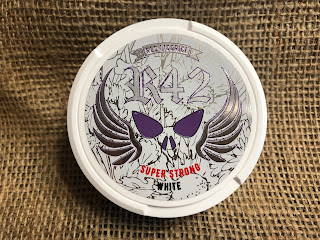 Several years ago, I heard about a Swedish Match product named Rocket that was for sale in the border stores (which I did eventually get to review in 2017). At one point, that product evolved into one called Revel by Rocket. Revel by Rocket eventually evolved into R42, which now is a whole range of products with mint flavors (Cool Mint, Peppermint, and Green Mint, and "Super Strong"), a licorice flavor, and a tobacco flavor.  The R42 line also comes with some of the best looking snus cans on the market today.  It's grown from a border store only product line to now being for sale on the Swedish Match e-store.

The flavor description for this one says, "Dark and spicy tobacco character with clear raspberry and licorice elements." It comes in a 10g can with 13 portions for 0.77g portions. The nicotine content is 26mg/g (2.6%), or 20.02mg/portion. 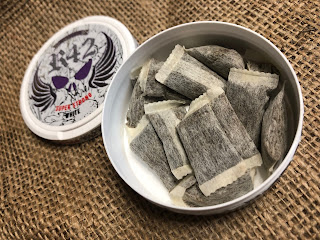 If you've had Small Batch 4: Raspberry Licorice, this one is a lot like that one, but more mild. The aroma is a mild tobacco smell, a light touch of raspberry, and a nice licorice presence. The portions are a dryer white portion, but not uncomfortable in the lip or anything.  The taste is really good; it's a pretty even balance of raspberry and licorice, but mild in nature.  The raspberry is natural, and lightly sweet.  The licorice flavor is present, and works great with the licorice flavor.  There's also a very mild tobacco character in the background.  The nicotine kick is quite strong, and feels well over the extra strong mark.  The flavor also lasts quite a while; I've found I can usually keep this one in for up to 1-1.5 hours.

It's nice to see this flavor living on in a product, I just wish it wasn't so strong.  But, if you like really high nicotine levels - give this one a try.  The flavor is delicious!
Posted by Chad Jones at 11:28 AM