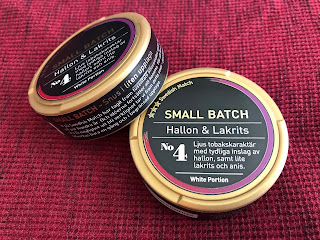 The Small Batch series is a new series of snus launched by Swedish Match this year. Swedish Match describes the Small Batch line by saying, "We at Swedish Match have produced thousands of products over the course of a few hundred years. Our experts are experts in the correct sense of the word. But they have not been tired of developing new ideas. In order for them to get that opportunity - and for Swedish snusers to be able to share it all - we now launch a new range of products called Small Batch, where the flavor is replaced several times a year. Each flavor is produced in a small edition." Small Batch #1 had a flavor of champagne. Small Batch #2, my previous favorite of the series so far, had a taste of blood orange. Small Batch #3 had an apple/mint flavor. And now, Small Batch #4 is launched, which has a raspberry (hallon) and licorice (lakrits) taste.

Here's a translation for what the can says.  I know this is only launched in Sweden, but a lot of my readers are English speakers, so I'm going to include this anyway.

Top of the can:  "Light tobacco character with clear elements of raspberry, and a little licorice and anise."

Side of the can:  "We at Swedish Match have produced thousands of snuses over the course of a few hundred years. And the ideas continue to come. To make it possible for several of them to become reality, we are introducing this snus - just this taste is made only once and in limited edition."

This product comes in a 24 gram can with 24 portions for 1 gram each.  I'm not sure what the nicotine strength is, as they don't listen it online, but I'd guess it's either regular strength or strong. 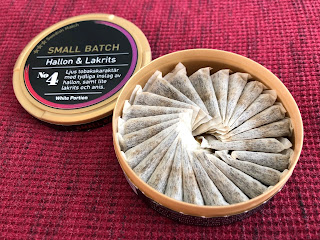 Now, I will say this up front. Small Batch #2 (Blood Orange) was previously my favorite release in the Small Batch series. This one has surpassed that one. When you open the can, the aroma that greets you is a pretty even mix of raspberry and licorice. The raspberry is very natural, and not overly sweet. The licorice aroma is, of course, a black licorice smell. The portions come in the star formation, so I suggest fluffing them before putting them in the lip. After that, they are quite soft and comfortable. The taste absolutely fantastic. I notice the raspberry taste first, which comes through as a natural raspberry flavor; it isn't sweet, or candy-like. The licorice taste is right behind it, which is a salty black licorice flavor. I also notice a mild tobacco character in the background which reminds me a lot of Prima Fint. In a way, this snus reminds me of a more flavorful version of Roda Lacket White Portion.    The nicotine feels to be between regular strength and strong, but I'm not sure what it is as it isn't listed online.  The flavor also lasts a good amount of time; I've found generally I can keep these portions in for about an hour.

As I said earlier, this is my favorite product of the Small Batch series.  I plan on ordering more to freeze before it's discontinued.  It is absolutely delicious!  If you want to try it, this product is available on the Swedish Match webstore and in their Swedish Match physical store locations.
Posted by Chad Jones at 11:14 AM