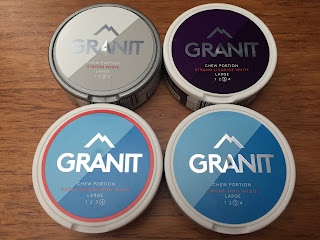 NOTE:  This is the old review.  Check out the new, updated review, here.

The Nordic Chew/"chew bag" category has been growing more and more over the past few years. It seems like more and more companies have been making "chew bag" products so they can sell their products in the EU, where Swedish Snus is banned. I did a video on Swedish Snus VS Nordic Chew if you're new to this category - it is very informative about the differences in these products. Spoiler alert, there really aren't any differences other than the name and the fact that the tobacco is cut in most of these, not ground. We've seen GN Tobacco's Alika Chew and Islay Whisky Chew Bags, Swedish Match's General Chew Bags and General Long Cut Chewing Tobacco, AG Snus's Ink Chew Bags and their U-Sample Chew Bags and Malmö Kardus Chew, Fiedler and Lundgren's Lundgren's X-Strong Chewing Tobacco, Gotlandssnus's Jakobsson's Ultra Strong Chew Bags, and V2 Tobacco's Al Capone Chewing Bags/Al Capone Chewing Tobacco and Thunder Chew/Thunder Chew Bags.  Needless to say, most companies are jumping in on the chew bag category where snus is illegal in the EU.  Now, Fiedler and Lundgren has launched four new chew bag products under the Granit name. 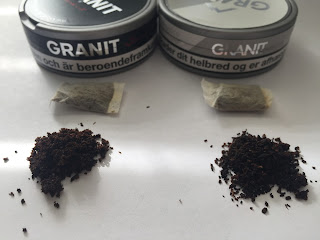 If you're new to chew bags, I always like to do a comparison between snus and chew bags in my reviews.  Luckily, at the time of this review, I had some Granit snus nearby to compare to the chew bags tobacco.  If you click the photo you can zoom in and get a closer look at it.  Basically, the snus tobacco on the left is ground, and the chew bag tobacco on the right is cut.  Both seem to be similar in moisture amounts, both are pasteurized tobacco products, both come in similar size white portions that feel the same in the lip.  The only difference is the name and how the tobacco is cut. 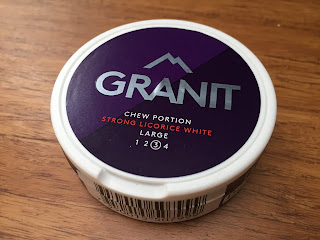 Going into this review, I didn't have much information.  I didn't have a flavor description or nicotine content.  I know that the can weighs 19.2 grams and contains 24 portions, meaning 0.8 gram portions.  Granit Strong Snus has a nicotine content of 12mg/g, so I imagine this product has a similar nicotine content since it's made by the same manufacturer.  Also, like Granit Snus, this can has the FlexLid, which is a rubber type bottom in the catch lid which allows it to expand as you put more used portions in it.  This is a great innovation that I've been a fan of for quite some time! 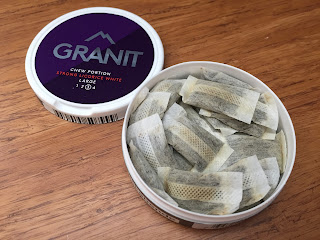 Back in 2014, I reviewed Granit Lakrits White Portion Snus. This product was discontinued, but the Granit Licorice Chew Bag product reminds me a lot of that one.  When you open the can, the aroma is a present black licorice smell with a touch of sweetness and a mild tobacco hint.  The pouches are soft and feel quite comfortable in the lip!  As far as the taste goes, it's actually pretty good.  The black licorice flavor comes through in a very mellow way, accompanied by a light touch of sweetness and a little salt.  The tobacco flavor comes out about 30 minutes in and blends pretty well with the licorice flavor.  It's not a lot of tobacco taste, however, and comes through in a more mild way.  The nicotine on this one has a pretty nice kick and feels to be between a strong and an extra strong.  This one also has a nice, long lasting flavor; I've found I can enjoy this product for an hour to an hour and a half.  Licorice lovers, give this one a try! 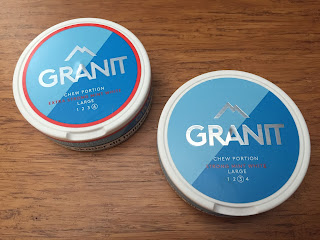 For these two products, I didn't have a flavor description or nicotine content for either one.  I know that both can weigh 19.2 grams and contains 24 portions each, meaning 0.8 gram portions.  Granit Strong Snus has a nicotine content of 12mg/g, so I imagine the Granit Strong White product has a similar nicotine content since it's made by the same manufacturer.  I'm not sure what the Extra Strong has in the nicotine department. I know the Lundgren's Extra Strong product has 16mg/g of nicotine, so it may be that much since it's made by the same manufacturer - but I'm not sure.  Like the previous product, this one also has the FlexLid, which is probably the greatest snus innovation since I started reviewing snus. 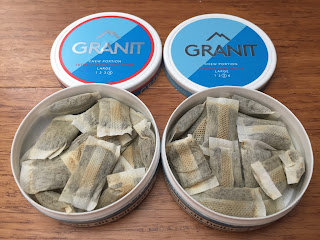 These products reminds me a lot of Lundgren's LG Slim Fresh Snus, so if you've ever had that one - these ones are a lot like that one in the aroma/taste department!  When you open the can, the aroma that comes through is a sharp peppermint smell accompanied by a hint of menthol.  The portions are soft and comfortable in the lip and, since they're mint products, come with a nice cooling sensation in the lip and mouth!  The taste is a mild taste of peppermint and a gentle hint of menthol.  It's not too sweet and comes through in a pleasant way.  The Strong Version packs a nice kick and feels to be between a strong and an extra strong.  The Extra Strong Version kicks even more, and feels to be firmly at the extra strong level.  Both of these have a long lasting flavor; I've found these both last up to an hour to an hour and a half!  If you're a fan of mint snus, these are worth a try! 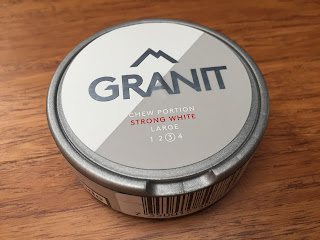 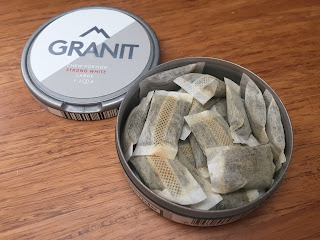 Honestly, this product reminds me a lot of Granit Stark Vit Snus. When you open the can, the aroma that comes through is a present smell of citrus, a mild tobacco aroma, and a light peppery smell. The portions are comfortable in the lip and feel very much like a regular white portion snus. The taste is the traditional taste of Swedish Snus, but in a chew bag format! A present taste of bergamot, a mild tobacco character in the background, a hint of pepper, and a little salt. The nicotine feels to be between a strong and an extra strong; it packs a nice kick! The flavor on this one also lasts a good amount of time; I can usually enjoy these for an hour to an hour and a half! If you're a lover of traditional flavored Swedish Snus but don't have access to snus due to legality, I'd definitely suggest trying these out.

As far as chew bag products go, all four of these are great releases from Fiedler and Lundgren and well worth a try!
Posted by Chad Jones at 4:15 PM