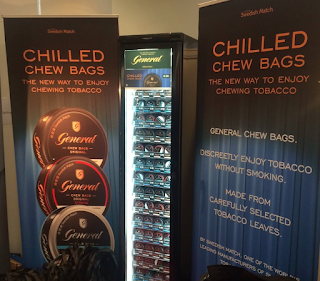 This is a preview of the 2016 version produced by Swedish Match.

Our friends at freesnus.ch on Facebook shared some exciting news this morning about Swedish Match/General in Switzerland. It appears as though Swedish Match is following the example of V2 Tobacco with Thunder Chew Bags, AG Snus with Ink Chew Bags and Gotlandssnus with Cruiser Chew Bags and launching their own "chewing tobacco" product under the General name - General Chew Bags or "Chilled Chew Bags" as the banners/chillers are saying.

It makes sense, and I figured this would happen eventually, that Swedish Match would embrace the "chew bags" movement to sell their products in other countries where snus is banned. 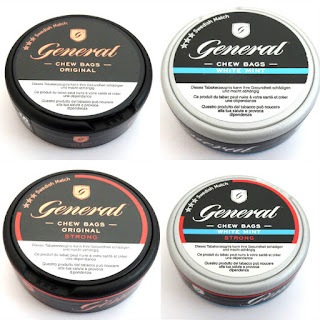 It appears as though there are 4 flavors: Original, Original Strong, White Mint and White Mint Strong.

The price looks to be 8.90 CHF, which seems pretty high - that's around 9$ USD.  But I'm not sure what the going rate is for tobacco in Switzerland. 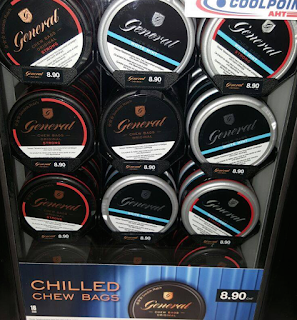 For those who have been asking if these products will launch anywhere other than Switzerland, it doesn't appear so at this time.  Swedish Match has said there are currently no plans for expansion. Swedish Match says this product consists of cut tobacco packaged in small portion bags. You use the product by chewing it three to four times and then place it under your lip. The paper used for chew bags is also said to be different. They apparently are using paper with a “high grammage” that provides a stronger bag designed to be chewed to release flavor and nicotine.

They have signed a contract with Valora, which will sell the product in their stores in Sweden. Apparently, there is a demand for alternative products in Switzerland, and due to that Swedish Match decided to launch this product in that market. 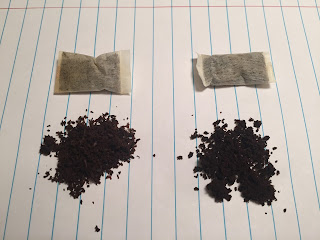 If you're new to this discussion, you may be asking yourself what a "chew bag" is and what the difference is between that and snus.  The description above makes it sound like these are vastly different products.  I wanted to do a comparison of a V2 Tobacco Chew Bag and a Swedish Match White Portion.  If you look at this photo, you can see the tobacco inside a chew bag on the left.  On the right side of the photo you'll see the tobacco inside a snus portion.  Notice a difference?  There isn't much of one.  Now, the new Swedish Match pouches may be completely different, but that remains to be seen.

If you want to buy these online and you're in Switzerland, I've seen them listed at SnusKautabak.ch, TabakCorner.ch and TabakOnline.ch.  Once I get ahold of some of these products I'll post a review!
Posted by Chad Jones at 1:06 PM