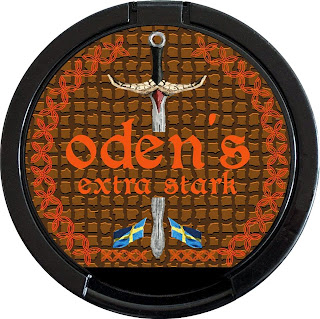 Today's review is going to be about Oden's 59 (Kanel) Extra Stark Portion. In the past, I've reviewed Oden's 59 Extra Stark Los, Oden's 59 Extreme Los, Oden's 59 Extreme Portion and Oden's 59 Original Portion. When it comes to this product, I know you can buy it on OdensSnus.com, but the only other store I've seen it for sale on is SnusBolaget. They describe it as, "Oden 59 Extra Strong Portion is carefully flavored by cinnamon, combined with the taste of tobacco. Distinct cinnamon scent but softly rounded in flavor. Oden's Extra Strong Portion 59 is a strong snus, flavored with cinnamon for a new approach to flavored snuff. The slightly spicy taste of cinnamon is always present in the background, but never takes over. A basically good blend of tobaccos makes Oden 59 Extra Strong Portion has a balanced flavor of cinnamon and tobacco without being too sweet. The portion is made of a soft material for a snus that fits well."

Let's talk about the cinnamon flavor in this snus.  Cinnamon is a spice obtained from the bark of a certain type of Evergreen tree. When I used to cook alot, I had pure cinnamon in stock all the time, it was one of my favorites. I would grind up the pure cinnamon with an herb grinder and use it to season chicken, beef, and some vegetables (it's great with acorn squash). I like cinnamon as a flavor in and of itself.  Oden's 59 Kanel Extra Stark is flavored, thankfully, with natural cinnamon and not cinnamon sugar.

When it comes to Oden's 59 Extra Stark Portions, the pouches are very comfortable and soft.  When you open a can, the aroma that comes through is a natural cinnamon smell mixed with earthy tobacco.  The flavor comes through mildly at first, the pure cinnamon flavor pairing gently with the earthy tobacco taste, and a light flavor of salt.

Oden's 59 Kanel Extra Stark is a great snus. An earthy tobacco flavor mixed with the flavor of pure cinnamon.  If you're into the flavor of cinnamon but don't want to go Extreme, this would be a good one to try out.
Posted by Chad Jones at 11:01 AM