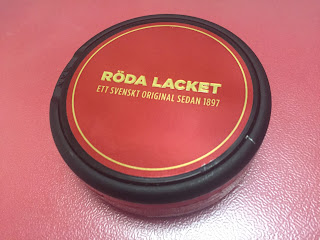 This product has been, surprisingly, discontinued.  It is no longer for sale.

It's been a LONG time since I've had Roda Lacket. Lately I've been revisiting old snuses in the past I've tried, but haven't reviewed for some reason. Roda Lacket is one of them. The bright red can is the current Roda Lacket can, and if it tells you how long it's been since I've had it, the last can of Roda Lacket I had is directly behind it. The old can had this cool little 80's vibe to it, the new can is a simple but classy red look. I don't know many Roda Lacket fans, but I know Anthony from DrSnus.com is a big fan and uses Roda quite a bit. I don't remember much about my experience with Roda in the past, I remember it was okay - I do remember, however, that I didn't like Claq Qui, which was a strong, amped up version of Roda Lacket. Much to the discontent of hardcore fans, however, Claq Qui was discontinued 13 January 2009. One of the snuses I didn't like. I think I liked Roda because it wasn't as strong tasting, and much more mellow. I think others liked Claq Qui because it was so bold and strong. Anyways, moving along! 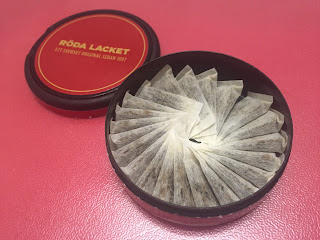 Roda is an old brand, the oldest next to Ettan. It was launched in 1850. Roda Lacket is a white portion snus from Swedish Match, meaning it is arranged in the star formation which is common to all Swedish Match white portion snuses. Last time I tried it they weren't doing this for all of them. The portions have that little moisture ring around the top of the portion which means this portion is going to be moist, always a good thing. The aroma is fruity, reminds me kind of GR No2 but without the juniper/floral/lemon thing going on. Just straight fruity. The taste is slightly sweet - a mellow berry flavor that tastes like a mix of cranberry and strawberry. The taste is very fresh, with a mild salt balance and a gentle flavor. I've heard in the past (and read in the product description) about a taste of licorice, I've never really detected this flavor. All things considered, Roda Lacket is pretty good - as I said with my review of Göteborgs Rapé, this is a snus that you can throw into your rotation to mix things up a bit. It's quite good.
Posted by Chad Jones at 11:37 AM