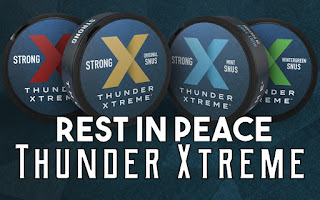 Yesterday, SnusCENTRAL.org broke the news that Thunder Xtreme Snus would be discontinued effective April 15th, 2020. Thunder Xtreme is a line of snus launched in the US in 2018 that was grandfathered and released thanks to Swedish Match's 2017 purchase of V2 Tobacco.  This line launched with Thunder Xtreme Original, Original Strong, and Red Strong.  It would grow and add two new additions in late 2019, Thunder Xtreme Mint and Thunder Xtreme Wintergreen.  What made these products special was that they were the only strong snus products sold in the US.  They added more variety for US consumers who enjoy buying locally. 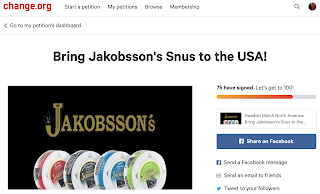 So, I made a petition to Swedish Match, asking them to bring Jakobsson's Snus to the US, and use their full distribution force behind it.  I know,  petitions seldom work, but I figured it was worth a shot.  I personally buy online, but I know a lot of people buy locally.  I know a lot of people don't even know what snus is until they find it in their local store.  And with Thunder Xtreme gone, there is a big hole for snus with strong nicotine, a hole that Jakobsson's would fill quite nicely.  So please, sign the petition, and let's see if we can get anything to happen with this!
Posted by Chad Jones at 12:31 PM