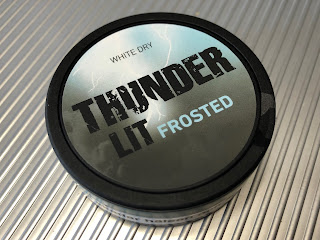 This is an interesting product, and it requires a little backstory. As many of you know, back in September of 2017, Swedish Match purchased V2 Tobacco. Since then, V2 Tobacco has cut down most of the snus products they produce and focused on chew bags. The only Frosted snus products still made are the classic Thunder Frosted Extra Strong, Thunder Frosted Slim White Dry, and this one. I know, this is a new product. This appears to be the old Thunder Frosted Ultra Strong White Dry, rebranded as Lit Frosted (White Dry), as most stores are showing Ultra out of stock at this time. The LIT line is what they're calling their Ultra Strong chew bags now (there's also a chew bag version of this one, so it appears they're now calling their ultra strong snus products "LIT" as well.  So hopefully that explains it a little bit.  This is a new product, but not really a new product.

The flavor description for this one says, "White dry portion with taste of spearmint and menthol."  Each can weighs 13g and has 21 portions, for 0.62g portions.  I'm not sure what the nicotine content is, as the Lit line has 22mg/g, but the old Ultra line had 42mg/g.  So I'm just going to say it's between 22mg/g-42mg/g, until I know for sure.  Needless to say, it's quite strong. 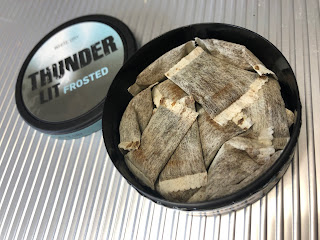 When you open the can, a mild, sweet aroma of spearmint greets you. The portions are, of course, the white dry format. They're pretty soft but do feel a little dry under the lip when you put one in. But don't fret, as they get more moist they do get more comfortable! You also get a nice cooling presence under the lip when you put one in. The flavor of spearmint is mild, but still pretty present. There's also a mild tobacco character in the background, as well! It has quite a strong kick to it, I feel it within a few minutes of putting one in, and it feels well above the extra strong level. I'm not sure how long the flavor lasts, because I can only keep these in for about 15-20 minutes; it's much too strong for me!

If you like mint snus and want something with a spearmint taste and a super strong kick, you'll probably really enjoy this one.  It was much too strong for me personally, but I don't use a lot of this stuff.
Posted by Chad Jones at 12:21 PM