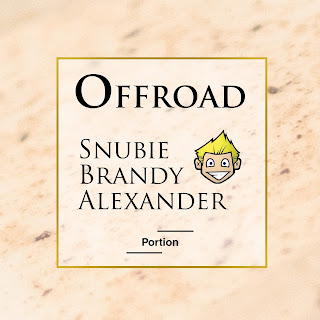 I've been teasing this for a while, but it's time to let the cat out of the bag. I've partnered with V2 Tobacco to release my own snus.  Meet Offroad: Snubie Brandy Alexander (Original Portion). If you asked me on May 5th, 2009, when I wrote my first article if I ever imagined I'd have my own snus product, I would have stared in disbelief.  But now, it's actually happened.  I've always been a fan of V2 products because I view them as the "indie" tobacco company.  And them going so far as to not only do this with me, but to let me customize every detail of the product, further shows how fantastic V2 Tobacco is. Also, as many of you know, Swedish Match purchased V2 Tobacco last month, so the fact that this still happened after being bought by the largest Swedish Snus company shows that they still have that indie snus company feel. 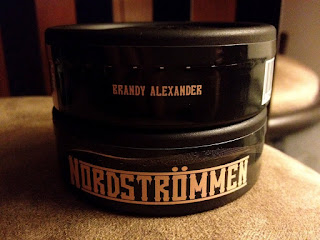 So, how did this happen?  Well, that's a long and very interesting story.  First of all, Brandy Alexander originally launched in 2008 as part of the 2008 Offroad Limited Edition Line. I wasn't snusing back then, so unfortunately I didn't get to try it.  Fast forward to June 2009 and the first loose snus product that I ever tried was Nordströmmen Chocolate Raspberry by V2 Tobacco. It was part of the Nordströmmen Limited Edition los line from V2 Tobacco.  Shortly after that, I discovered one of the other flavors in that line:  Brandy Alexander.  It was love at first sight, smell, and taste.  To this date, after reviewing hundreds of snus products, I still consider it the best thing I've ever tasted. Needless to say, it didn't stay around long, as it was a limited edition. However, in 2011, V2 gave me the option to bring it back if I could help get their Facebook page to 500 likes, which we did! In January of 2012, Nordströmmen Brandy Alexander Lös (pictured left) returned! You can check out my review, here. It proved popular and the first batch sold out almost immediately! V2 quickly made more, and the snus stayed around for a little bit longer before going away. It was a limited edition this time, as well. In honor of the success of the campaign, V2 sent me some special Brandy Alexander cans with my logo on them, and that was when I realized I wanted to have my own snus. Fast forward to 2013, V2 brought forth Thunder Ultra Strong: Brandy Alexander, which was the first time this flavor was seen in the portion format.  It stayed around for a while, and then was discontinued.  After that, I give much thought to having my own snus, but it kicked around in the back of my mind here and there. 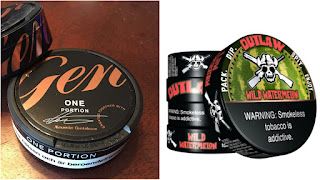 Fast forward to 2017, and two things happened that made me want my own snus. In August, 2017, Swedish Match released the General One and Göteborg's Rapé One snus products, which were created with Alexander "The Mauler" Gustafsson of the UFC. When I did my video review of that product I remarked that it would be cool to have a "created together with Snubie" product. I realized Swedish Match probably wouldn't ever go for it, but that's when I started really thinking about it. Then, something else happened. Outlaw Dipper on YouTube created his own dip - Outlaw Wild Watermelon. At that point I got to thinking, if the most well known dipper got his own product, why not the most well known snus reviewer?  And that was when I decided it was time to see if I could make it happen.  I pitched the idea to V2 Tobacco, and a day later they told me they wanted to do it. 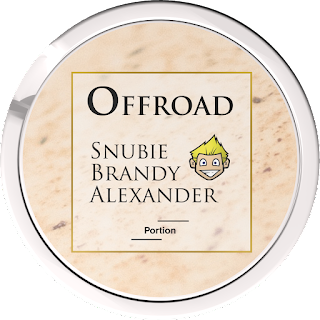 So, you probably want to know more about this new snus, right?  When I realized I wanted to have my own product, only one thing came to mind: Brandy Alexander.  That was the main reason I pitched the idea to V2 Tobacco.  But I didn't just want a return of the Brandy Alexander Los, I wanted a brand new product.  V2 let me supply every detail of this product to make it fully a Snubie Snus release.  From the portion format, to the portion weight, to the moisture level, to the nicotine strength, to the can design, I was involved in every step of the process from conception to production.  And yes, this is a regular strength product.  That's probably the question I've been asked the most, and I always say the same thing:  I focus more on flavor than nicotine.  With this snus, the flavor is the main focus.  I feel that high nicotine products put too much focus on the nicotine and it detracts from the flavor.  With Snubie Brandy Alexander I want the flavor to be front and center. 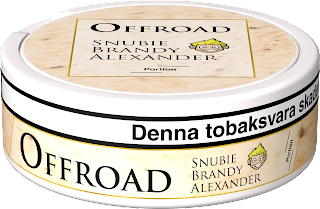 To say this is the highlight of my snus career would be an understatement.  This is one of the coolest things that I've ever done.  That guy who started writing snus reviews back in 2009 would have never imagined a day like this.  And now, Offroad: Snubie Brandy Alexander (Original Portion) is a reality.  You're probably asking, "Where can I get it?".  Well, I wanted to make sure everyone who wanted it had access to it.  For the past few weeks I've been talking to webstores and receiving an overwhelmingly positive response from stores that look forward to stocking it! If you're in the US, our friends at SnusCENTRAL.com will be stocking it and they will actually have it on sale for a pre-release period before the general public has access to it. In the EU? No problem! SnusLine.com has agreed to stock it, as well! If you're in Sweden, our friends at SnusBolaget.se have also agreed to stock it. Other stores have also said they want to sell it, such as Northerner.com, SnusHof.com, Snus24.com, BuySnus.com and SnusDirect.com.    So, if you want to try this snus, you'll absolutely be able to get ahold of it!

Snubie Brandy Alexander is set to release in January, 2018.  If you want to find the exact date as soon as I know it, the easiest way is to Like us on Facebook, follow us on Twitter (@SnubieDotCom), and follow us on Instagram (@SnubieDotCom).  That's also the best way to stay up to date with news about this exciting new release!