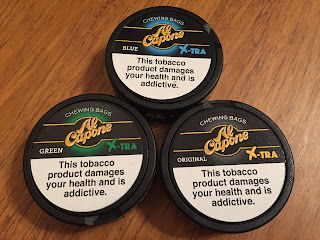 Today we're going to be talking about 3 new chew bag products from Al Capone. Northerner.com says these products are "produced by V2 under the license of Al Capone.” In the past I've reviewed a few Al Capone products, such as their dry purified snus products such as Al Capone Pure, Al Capone Citrus, and Al Capone Mint.  I've also reviewed some of their chew bags such as Al Capone Blue and Gold Chew Bags, as well as Al Capone Mint and Vanilla (Loose Chew).  In this review we're going to be talking about three new products in the Al Capone chew bag lineup.  In this review, I won't be going into the differences between snus and chew bags.  If you're interested in exploring that and learning more, please check out the video I made on the subject!  Now, let's get into the reviews! 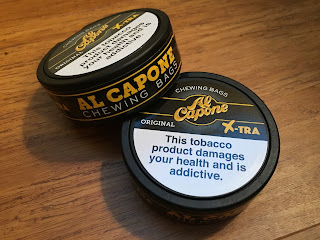 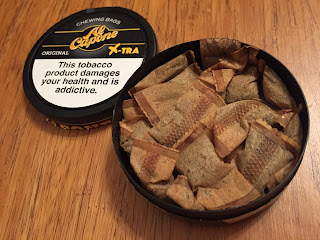 When you open the can of Al Capone Xtra (Original), the aroma that comes through is a mild tobacco smell, and a light hint of citrus.  There's also a faint herbal quality to it.  This product reminds me a lot of Phantom Classic (Original Portion) Snus. You'll also notice the portions/chew bags come in the original portion format. Most chew bags tend to come in the white portion format, so this is a nice change!  They're also comfortable in the lip and have a quick release of flavor.  The taste also reminds me of Phantom Classic.  The tobacco flavor is the most present part of the flavor profile, and is accompanied by a light touch of citrus, and a gentle herbal taste in the background.  These chew bags last about as long as original portion snus; I've found I can enjoy these for up to 45 minutes on average.  The nicotine content feels to be stronger than a regular strength snus or chew bag, but not extra strong.  It has a nice extra kick of nicotine to it, but it isn't overdone! 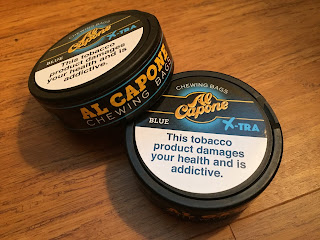 Flavor Description: "Al Capone Blue X-TRA has a cool and refreshing flavor with a boost of mint." 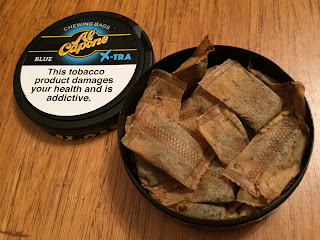 I was interested to see if this one would compare to the Al Capone Blue Chew Bags I reviewed a few months back.  These are different, because with those I noted menthol in the aroma and taste and I don't notice it with these.  When you open the can, the aroma that comes through is a very present, sharp peppermint smell.  The portions are original, which you don't see often in chew bags.  There is also a quick release of flavor!  Being a mint product, you get that nice cooling sensation in the lip, as well.  The taste is a mellow peppermint taste with a light touch of sweetness.  The sweetness isn't overdone, so the flavor is pretty pleasant.  The flavor lasts a decent amount of time; with this one it's usually about 30-40 minutes.  The nicotine strength feels to be a little stronger than a regular strength product, but not as strong as an extra strong.  It has that little extra kick of nicotine, but not over the top nicotine. 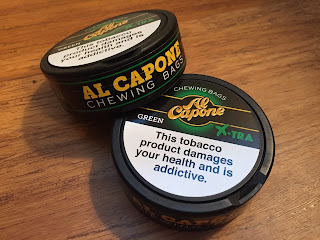 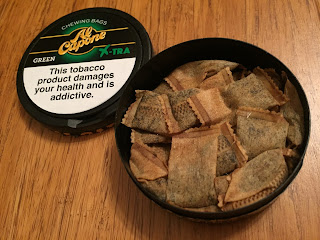 When you open the can, the aroma that comes through reminds me a lot of Thunder Cool Mint (Slim Original).  However, it's a little more sharp.  The mint aroma is sharp, but smooth.  I know, those words don't go together, but that's the best I can describe it.  I know the flavor description says spearmint, but it seems like there's some peppermint in it, too.  These are also original portions, which isn't common in chew bag products.  Being an original portion, you get a quick release of flavor!  Also, since it's a mint product, you'll get a nice cooling sensation in the lip as well!  Comparing this one to the blue, I would say the mint taste is more smooth, but also a little sweeter.  Like with the aroma, it's hard to peg this one down.  The flavor description says spearmint, but I swear I also taste a little peppermint in there, too.  The flavor lasts about the same as the blue; I usually can keep this one in for about 30-40 minutes.  The nicotine kick feels to be stronger than a regular strength product, but not as strong as an extra strong.

Final Thoughts:
As far as these three products go, they're all pretty enjoyable.  I like the Green more than the Blue, but both are good.  The Original is also a good option if you're into more traditional flavors.  I'd suggest giving them all a try if you're a chew bag fan, because all three are pretty decent.
Posted by Chad Jones at 7:32 PM