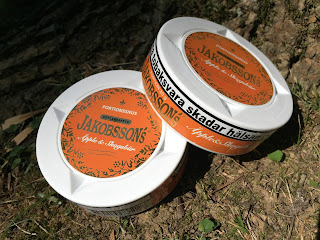 Note:  This is a limited edition product released in the fall season.

In March, 2017, Gotlandssnus announced the Jakobsson’s line would go through a redesign. This redesign would also mean the Gotlandssnus limited products would fall under the Jakobsson’s brand, and have new names. Påsksnus, their easter flavor, was discontinued and replaced with Jakobsson’s Gullviva and Viol. Sommarsnus, their summer flavor, was replaced with Jakobsson’s Hallon and Jordgubb. Julesnus will be replaced by Jakobsson’s Glogg and Kanel at the end of the year. The one we are talking about, Äpple and Skogsbär, is a replacement for Höstsnus. Though these products all have new names and designs, they’re the same products you know and love in all other aspects. The flavor description says, "Jakobsson's Äpple and Skogsbär Portion Snus is this year's limited edition fall snus. This Autumn 2017 snus brings apple and dark forest berries making a very tasty treat!" This product comes in a 20 gram can with 20 portion, for 1 gram portions. The nicotine content is 1.0%, or 10mg/g, which breaks down easily to 10mg/portion. 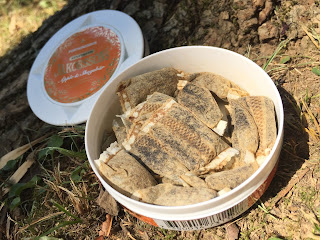 As I said before, if you've had this snus before when it was called Höstsnus, it's the same taste, but in a new can. When you open the can, a present smell of apple greets you, accompanied by a light berry smell in the background. The portions are soft to the touch and very comfortable in the lip! I've always been a fan of Gotlandssnus portions because they're original portions, but aren't overly moist so you get a long lasting flavor, along with a quick release of flavor. When it comes to the flavor, the taste of apple is in the front, accompanied by a taste that reminds me of pear. In the background there's a light berry taste; it reminds me of a mild, less sweet strawberry taste. It's a really great tasting snus. The flavor lasts a good amount of time as well; I've found I can enjoy this snus for up to an hour, which is impressive for an original portion. The nicotine content weighs in at 10mg/g, but it doesn't feel much stronger than regular strength. So, if you're someone like me who uses 8mg/g snus, you won't be overwhelmed by the extra 2mg/g of nicotine in this product.