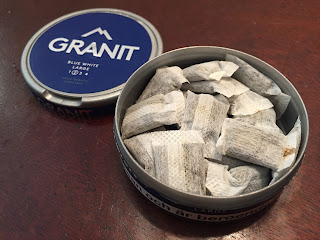 With the popularity of Göteborg's Rapé, I've noticed more companies releasing juniper flavored snus products lately. It makes sense, it's a popular flavor. Currently on the market we have Knox Blue White by Skruf, Kapten Enbar by AG Snus, Phantom Blue by V2 Tobacco (which may be discontinued, but I'm not sure), Gustavus Slim Cut Blue by JTI/Nordic Snus AB, and Offroad Blue Selection by V2 Tobacco. Now, Fiedler and Lundgren have released Granit Blue White Portion. The flavor description says, "Granit Blue White is the latest in the Granit series. The white portions have a tangible taste of lavender, fresh citrus, natural bergamot and classic juniper berries." This snus comes in a 17.6 gram can with 22 portions, for 0.8 gram portions. The nicotine content is 8mg/g (0.8%), which breaks down to 6.40mg/portion. 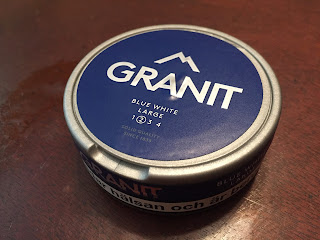 All of Fiedler and Lundgren's products now have the FlexLid, which is a neat addition of a rubbery catch lid witch allows the inner used portion compartment to expand as you add more used portions. I've said it before and I'll say it again - it's the coolest innovation since I started using snus. When you open the can you'll encounter a mild juniper aroma, a light smell of citrus, and a touch of lavender which comes through as a sweet floral smell. This is a really nice smelling snus! The portions are soft to the touch and feel comfortable under the lip. The taste begins with a mild taste of juniper and a gentle touch of lavender. The lavender adds a light floral sweetness to the juniper that works really well with this snus. The longer you have the snus in the more you'll notice a mild element of citrus. I find the citrus flavor comes through in a mellow way, it isn't too bitter, nor is it sweet. It's a rather gentle, lightly tart, mild citrus flavor. The nicotine kick for this one feels to be about regular strength. And I've found the flavor lasts quite a while as well! I've been able to enjoy this snus for up to an hour, sometimes I've pushed it to an hour and a half!

As far as juniper flavored snus products go, this one is one I'd definitely suggest trying!  On SnusBolaget it's priced at $3.01 USD (24kr) per can.  Comparatively, Göteborg's Rapé is priced at $5.26 USD (42kr) per can.  So it's a much cheaper option if you like the taste of juniper and want to save a few bucks!
Posted by Chad Jones at 6:34 PM