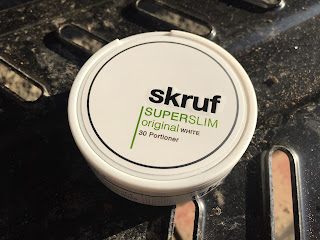 When Swedish Match launched G3 Mint Super Slim White Strong in 2016, I wasn't sure if the "super slim" format would be something that caught on. In early 2017, they released another super slim, G3 Super Slim White Strong.  Now, it appears as though Skruf is jumping on board the super slim train.  This month, they released two new products in the super slim format: Skruf Original White SuperSlim and Skruf Fresh White SuperSlim. Skruf describes this product by saying "Skruf SuperSlim Original White comes in a narrower and more discreet format than our other slim portions and can therefore be perceived as more comfortable under the lip. It is a classic white portion of snus with a well balanced and mild tobacco flavor. A box contains 30 servings." 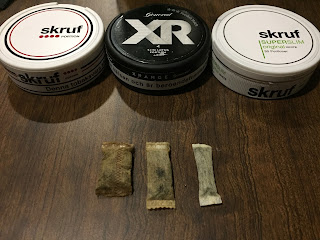 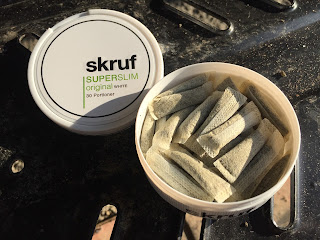 If you've ever had the Norwegian Skruf White Portion, this one is virtually the same, but in a super slim portion. When you open the can, the aroma that comes through is a mild citrus smell with a light floral sweetness. The portions are quite slim, but they don’t feel too small. The portion material is also soft, which feels comfortable in the lip. This snus tastes like you would expect from Skruf: a mild taste of citrus accompanied by a light floral sweetness due to the rose oil that Skruf uses in their recipes. There is a very light tobacco flavor in the background, but it’s not too bold. The flavor on these lasts a good amount of time, between an hour and an hour and a half. The nicotine strength feels to be lighter than a regular strength snus, being that it’s probably between 4mg/portion and 5mg/portion.

Super slim is an interesting portion format.  Personally, it's not something I would use.  But there are a lot of snus users who are concerned with discretion, and this is a great way to consume snus and be discrete about it.  The portions feel more substantial in the lip than mini portions, which is a plus.  If you like the flavor of regular Skruf White Portion but want something in a super slim format, give this one a try!
Posted by Chad Jones at 8:05 PM