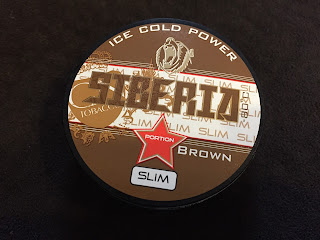 GN Tobacco has been releasing more slim portions lately, and they have moved on to their Siberia line next. I originally reviewed Siberia in June of 2015 when it launched in the square tub versions. I've also reviewed the round can versions of Siberia Red, Siberia Blue, and Siberia Brown. I recently reviewed the Siberia Blue (Slim White) Portion and the new Siberia Red that was released on the Canadian market. The flavor description says, “Siberia -80°C Slim Brown Portion Snus is the slim portion version of Siberia Brown original portion.  Like the original, it's packed with 4.3% nicotine for an eye-opening experience but now comes in a slim portion pouch for smoother mouth feel.” Siberia Brown comes in a 20 gram can with 24 portions. Each portion weighs 0.83 grams. The nicotine strength is 43mg/g (4.3%), or 35.83mg/portion. 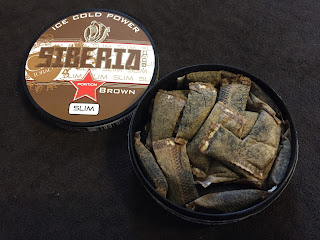 When you open the can, the aroma that comes through is a very sharp mint smell. It stings to smell it, that's how sharp it is! It's more of a natural mint aroma with a little peppermint mixed in. The portions are slim and very comfortable in the lip. They're quite moist, so the flavor and nicotine comes on quickly! You'll experience a mild tingle/cooling sensation when you put a portion in, along with a mild burn. That may explain why Siberia was originally called Siberia: Fire and Ice - because you get a cooling and burnin sensation! The taste is a sharp, biting mint flavor. It's closer to natural mint, but I can taste a little peppermint as well. The longer you have the portion in the more you'll notice a mild, dark tobacco character in the background. I can usually keep these in for about 30 minutes before I have to take them out, so I can't speak to how long the flavor lasts. I can say, however, original portions usually last 45 minutes to an hour, so I assume it's close to that. The nicotine kick is very, very strong. I feel it kick in at about the 5 minute mark. It doesn't feel as strong as the regular Siberia Brown, but it still delivers an extremely strong kick!

If you're a lover of the Siberia line and want a slim, original portion version, this is a must try!  It has the same great taste, but in a slim portion.  I don't do a lot of strong snus, so this isn't something I'd use again, but I can imagine it's going to be a favorite of those who enjoy this type of snus!
Posted by Chad Jones at 5:00 PM