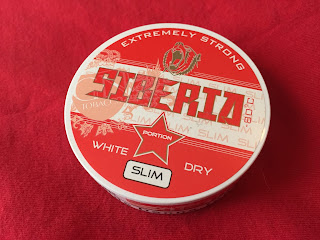 GN Tobacco has been releasing more slim portions lately, and they have moved on to their Siberia line next. I originally reviewed Siberia in June of 2015 when it launched in the square tub versions. I've also reviewed the round can versions of Siberia Red, Siberia Blue, and Siberia Brown. I recently reviewed the Siberia Blue (Slim White) Portion and the new Siberia Red that was released on the Canadian market. With all these products now available, it still seems that Siberia Red holds the crown for fan favorite. When it comes to the flavor description, it is described as being "the slim portion version of Siberia -80°C White Dry Snus.  Like the original, it's packed with 4.3% nicotine for an eye-opening experience but is now in a slim portion pouch for smoother mouth feel." This product has a nicotine content of 4.3% or 43mg/g. The can weighs 13 grams and contains 21 portions, which equals out to about 0.61 gram portions. The nicotine content per portion is 26.61mg/portion. 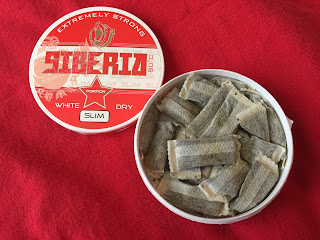 The product itself is very similar to the regular sized Siberia Red. When you open the can, the aroma that comes through is a very sharp mint aroma. The portions are quite soft, which is interesting because you don’t see that too often with white dry snus. They’re slimmer than the regular Siberia Red portions and feel very comfortable in the lip! The mild cooling tingle and the light burn is also present when you put a portion in the lip. The flavor is a very sharp and biting mint flavor! The longer you have the portion in the more you can detect a dark tobacco taste in the background. It’s relatively mild and does stay in the back. The nicotine hit is almost immediate and it is extremely strong! I can only keep these in for about 15 minutes, so I can’t speak to how long the flavor lasts, but I can say that it delivers quite a punch! If you’re a fan of the regular sized Siberia Red and want something in a slim portion, this product is worth a try.
Posted by Chad Jones at 9:49 AM