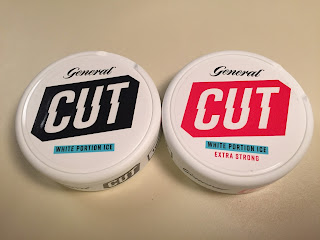 NOTE:  This is the old review when these products were made by Swedish Match.  They are now made by V2 Tobacco/Swedish Match North Europe.  Check out the new review, here. 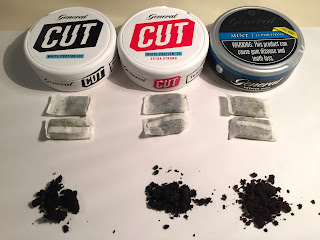 As usual with these type of products, I wanted to compare the pouches and do a cut test.  Looking at the portions, you can see that they don't look much different in terms of moisture amount or size.  The portion material feels the same to the touch in both the General Cut products and the General Snus products. 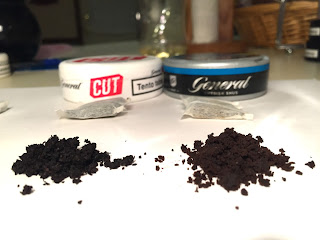 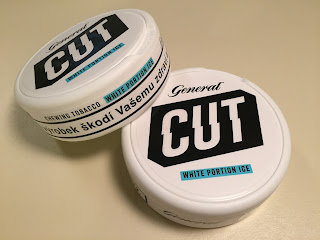 When it comes to General Cut Ice (White Portion), the product description says, “General chewing tobacco, cut into slices and packaged into portions, with ripe flavors of mint tobacco." 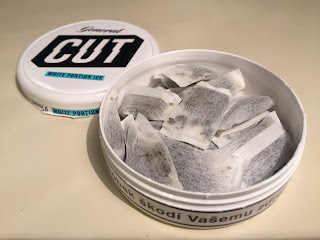 When you open the can, the aroma that comes through is a mellow peppermint smell.  It's not very sharp, and it's not overly sweet. The aroma is close to General G3 Mint and The Lab 12, but the peppermint smell isn't as sharp.  The portions are soft, but the tobacco in the pouch is quite firm/compact.  I suggest fluffing the tobacco inside the pouch before putting it under your lip. You'll notice a mild cooling sensation in your lip whenever you put in a portion of General Ice.  The flavor also reminds me of General G3 Mint or The Lab 12, but it's not as sharp.  The peppermint flavor is much more mild, and I can also taste more tobacco in this one.  The tobacco taste isn't bold or overbearing, but the longer you have a pouch in the more you'll notice it in the background.  The nicotine strength of this one is 14mg/g, so it feels a little stronger than a regular strength snus, but it won't knock you out or anything. 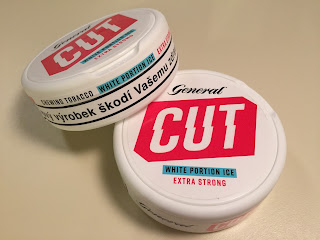 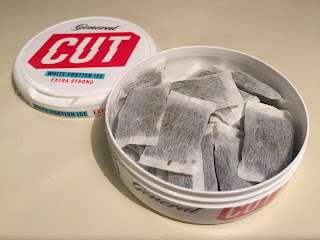 Much like the regular strength counterpart, the aroma you'll experience when opening this can is a gentle, mild peppermint smell. It also reminds me of General G3 Mint or The Lab 12, but the peppermint smell is more dialed back and not as sharp or focused.  I also suggest fluffing these pouches before you put them under your lip.  The portion material is soft, but the tobacco in the pouch is firm and compact, so breaking it up and fluffing it makes the portion more comfortable in the lip.  When you put a portion in the lip you'll notice a mild cooling sensation.  The flavor is very much similar to the regular strength version.  It's close to The Lab 12 or General G3 Mint in that it is a peppermint flavored product.  But, the peppermint taste is more dialed back and mellowed.  You'll also notice a taste of tobacco the longer you have the portion in your lip!  The nicotine content is 20mg/g and you'll certainly feel a nice kick from this one!

These are both great products.  If you like mint flavored snus and are in the Czech Republic or Denmark, these General Cut products are certainly worth trying out!
Posted by Chad Jones at 4:00 PM