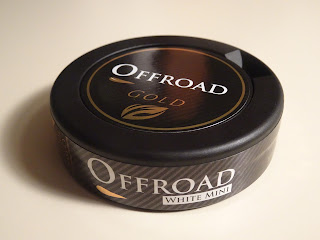 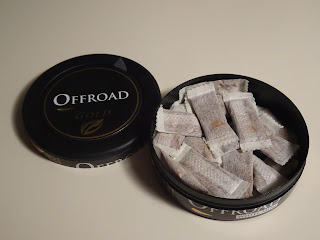 This one reminds me a lot of the Offroad Gold White Dry. The pouches and tobacco are dry to the touch. The aroma that comes through is a present smell of citrus, a light sweetness and a little pepper. The portions are a little dry, but that allows them to last a lot longer. I found with these I was about to enjoy them in the lip for up to 2 hours. They're pretty comfortable, as well. The taste develops relatively slowly. There is a mild citrus taste, a mellow salt balance and a little bit of pepper. The longer you have it in the more you'll notice a light tobacco presence in the background. As I mentioned in my review of Offroad Gold White Dry, I'd say this one isn't a General clone, but is closer to something like Oden's 69 White Dry. If you're into mini portion snus and want one with a traditional flavor, give this one a try!
Posted by Chad Jones at 8:00 AM