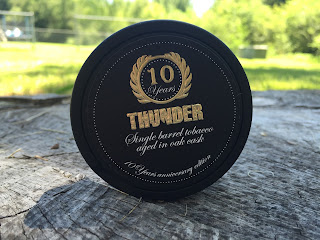 V2 Tobacco is a truly interesting company. The same company that made my least favorite snus, Offroad Moonshine also made my all time favorite snus, Nordstrommen Brandy Alexander. In the past, I wrote in depth about the history of V2 as well as how impressive their customer service is. V2 is a company that truly cares about their customers and engages with them. In fact, in 2013, they asked their customers on Facebook what flavor they wanted released and they made it happen!  V2 is truly a company that cares about the consumer.  I can't believe they're celebrating 10 years.  The first V2 product I ever tried and reviewed was Offroad Cranberry in May of 2009. Their first product I truly fell in love with was Thunder Frosted Extra Strong. Back in the early days, this was a product a lot of new snus users from America fell in love with. To this day, it's one of the most popular mint snus products on the market.  Now, to celebrate V2's 10 year anniversary, they're doing something a lot of people have asked for.

V2 has released a 10 year anniversary snus that is tobacco centric and contains no added flavor. Yes, you read that correctly. The product description says, "Thunder 10 Year Anniversary Edition Portion Snus is a limited edition very special release to commemorate the 10th anniversary of V2 Tobacco This product is made from fermented tobacco aged in oak casks. It’s a pure tobacco, high quality and a very high natural nicotine content which comes on very smooth. No additives! Just tobacco and water." 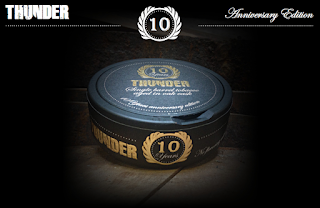 For the 10 year anniversary edition of Thunder, V2 says it is a very limited edition made from selected tobacco aged in oak casks.  It is so limited, in fact, that only 1,010 stocks were made.  They describe it as ultra strength with a very smooth delivery. V2 says the taste is good, traditional, pure tobacco. The tobacco used is from the Arapiraca region. The Arapiraca, or Mata Fina tobacco, is a traditional Bazillian dark air cured variety and is one of the oldest known tobacco seeds in the western world. In fact, the first exports date back to 1570 and the Portuguese crown. The Perique fermentation used is an anaerobe barrel fermentation. The leaves are placed in wooden barrels under high pressure. Every few months they take the leaves out, put the bottom ones on top and press them back. The whole process takes about 12 months. The oak barrels themselves are made from the same native wood that is used to produce wine in South America. 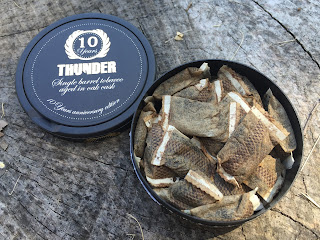 Now that we've talked a little about the history of V2 and some background on this product, let's talk about the taste. I know, my reviews are usually short and to the point, but since this is a special edition I figured it deserved some extra background and attention. The can this one comes in is utterly beautiful. It also features V2's new catch lid which covers the entire top of the can.  The portions have a great amount of moisture but aren't exceedingly moist.

When you open the can, the smell is absolutely breathtaking, and I don't use that term lightly.  If you're a tobacco lover, you're going to enjoy this snus very much.  The aroma is a very raw, robust, natural tobacco smell.  There's also a present hint of oak in the smell.  It smells a lot like a good cigar. I've heard Mata Fina tobacco described as, "very smooth and creamy, sweet, aromatic, medium-bodied smoke. The foundation flavor is chocolatey and woody, the aroma is rich and syrupy with mild spice notes."  The taste of this snus is where it really shines.  In all sense of the word, it is a very natural tobacco flavor.  It doesn't have any sweetness, no salt, no pepper, just a raw tobacco taste.  The flavor is very woody, with oak notes shining through the tobacco taste.  The tobacco flavor itself is rich, but also seems to have a slight spice to it, as well.  The taste is bold, but well rounded and earthy at the same time.  Much like the aroma, the flavor is a lot like a good cigar.

If you're a lover of tobacco, this snus is a must try.  I've been waiting years for a snus like this, and I truly hope V2 will find a way to keep this taste in their catalog.  But, until then, I suggest stocking up, because this is a taste that can't be beat.
Posted by Chad Jones at 1:06 PM