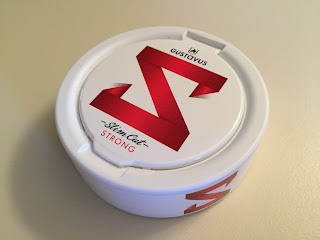 NOTE  This product has been discontinued and is no longer for sale.

Gustavus Slim Cut is a new line from JTI. The name "slim cut" doesn't denote the way the tobacco is cut or ground, it's simply just the brand name. The portions are slim white portions and slightly smaller than your average snus portion.  I've been told these products are designed to compete with XRANGE from Swedish Match, which might explain the big Z on the can.  Perhaps it is to look bold like the big XR on the XRANGE cans.

The product description says, "Gustavus Slim Cut Strong is a new snus with classic taste and extra strength. An affordable portion-slim format."  Going into this one, I was hoping it would be a strong portion of Gustavus White Portion, but unfortunately that wasn't the case. That doesn't mean this is a bad snus, I'm just a little bummed that it wasn't a strong version of Gustavus. 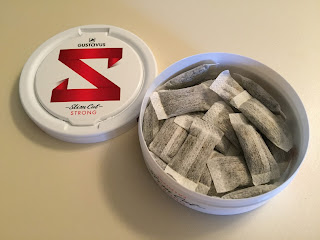 When you open the can you'll notice the portions are slim white portions but slightly smaller than your average snus portion. I would call these mini slim portions if I had to give them a name. Or even "midi", as they do remind me of the discontinued product Mocca Black Maple (Midi), as far as portion size goes.

When you open the can, the aroma that comes through reminds me a lot of General White Portion. There's a smell of bergamot, a hint of pepper and a touch of tobacco. If you're into traditional Swedish Snus, you'll definitely dig the way this stuff smells.  The taste follows the nose and again, it reminds me of General White Portion, but in a more mild way.  The flavor of bergamot comes through immediately, followed by a mild tobacco hint and a little pepper taste.  It's like a more mild version of General White Portion.  This snus is called "Strong", but I will say that I never detected any increased levels of nicotine.  To me, the nicotine level feels as strong as a regular strength snus.

This snus is a pretty good one, and if you're into traditional flavored Swedish Snus I would suggest trying it out.  For me, it's probably not something I would order again, but I will say that it does have a good flavor and a great looking can!
Posted by Chad Jones at 1:11 PM