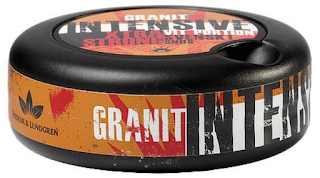 2016 is off to a bang, and we have two new products to talk about! The first one is surprisingly not new.  Those of you who are new to snus may not recognize this one, but this is Granit Intensive Xtra Strong White. This product was originally produced in 2012 and discontinued shortly thereafter and replaced by Granit Stark White, which was also discontinued shortly after that and then launched again a few years later. It looks as though Fiedler and Lundgren is going to give it another go and bring it back to the market! 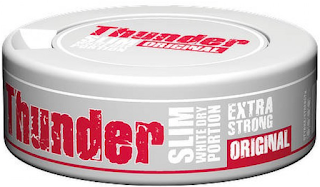 Thunder is adding another Slim White Dry product to the lineup, this one will be the original flavor. Thunder Original is a fantastic tasting snus, so I'm really excited to try this one. I really enjoyed their take on Frosted Slim White Dry as well as Thunder Cool Mint Slim White Dry, so I'm excited to see how this one translates to a slim white dry format snus.

I don't have any release info on either one of these, though I've seen them pop up on Snus2.se, so surely they'll be hitting other stores soon for folks in the US, as well.
Posted by Chad Jones at 6:56 PM