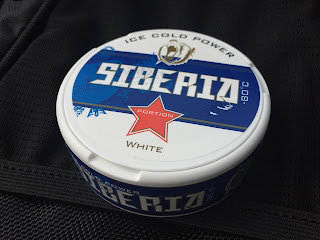 GN Tobacco originally launched Siberia -80 Degrees (White and White Dry) in square tubs which came with 500 portions per tub. By popular demand, GN Tobacco has released both Siberia products in the "round can" format. I reviewed the Siberia (Red Can) a few months ago ago, which was 42mg/g of nicotine and came in the white dry format. This is the white portion format, which clocks in at 24mg/g of nicotine. Needless to say, this stuff is quite strong and not for the weak of heart!  Ever since GNT burst onto the snus scene in 2011 with Oden's Extreme Portion, they have been on a mission to make stronger snus than what has been previously available. This product definitely fits the bill. The product description says, "Siberia -80°C ICE COLD POWER White portion snus is a step down in nicotine from the Siberia -80°C EXTREMELY Strong Dry White portion snus for those wanting the great Siberia taste without their heads exploding. This snus is still very strong at 24mg/g nicotine. Use with care!" 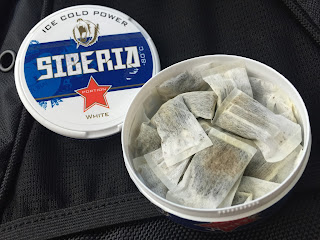 Being a white portion, this one has more moisture than the usual Oden's white dry format, which is how the majority of Oden's Snus products come when not in the original portion format. To date, GN Tobacco has only released two traditional white portions - this one and Oden's Cold (White Portion). First, I really dig this can. I try not to go on and an on about can design, but I really dig the design. It looks like something from Russia in the Cold War era. Even if you don't like mint snus, this is a can you'll want in your collection just because of how neat it looks.

The portions come a little compact, and the tobacco is usually isolated on one end of the pouch, so I do advise fluffing them before putting it into your lip.  Upon opening the can, the aroma is a sharp peppermint smell.  Much like when smelling horseradish, it's a very sharp smell and will sting the nostrils if you inhale too deeply!  There's a nice little burn that comes on when you put the portion in your lip and a slight cooling presence, as well.  The flavor is much like the Red Can version, a straightforward and very sharp peppermint flavor.  The longer you have it in the more you can notice a tobacco taste in the background but the peppermint is the front and center flavor.  The tobacco taste is very mild and stays in the background, it doesn't overpower the peppermint flavor at all.  The nicotine kick is quite strong; it kicks stronger than Oden's Extreme and feels a lot like Thunder Ultra Strong in nicotine delivery.  I don't do a lot of strong portions, so I definitely felt it.

If you're looking for a snus with a killer can design, a sharp peppermint taste, and a strong nicotine kick - check this one out!
Posted by Chad Jones at 11:10 AM