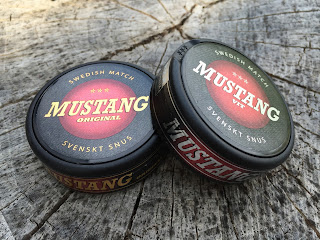 These products are being discontinued in early 2017.  Swedish Match is replacing them with Kaliber+ Extra Strong.

Swedish Match has launched a new product line called "Mustang", which comes in Original Portion, White Portion and Los. I've spoken with friends about this product and most people find the cans unremarkable, as do I, but what's inside the can is what matters most, and that's what we're discussing today.  Going into this one, I wasn't sure what to expect, but the more portions I used, the more I grew to like it.  It definitely has a complex flavor.

The product description for Mustang Original Portion says, "A dark and spicy tobacco taste with distinct notes of plums and dried fruits, along with hints of coffee, vanilla and citrus."

The product description for Mustang White Portion says, "A mellow and spicy tobacco taste with distinct notes of bergamot, tea and white flowers." 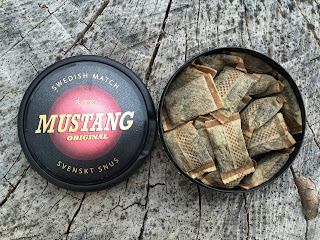 The Mustang Original portions are slightly less than a gram, but still pretty plump and full.  They have a great moisture amount and feel very soft in the lip.  The aroma is a very rich tobacco smell with a little bit of spice, a little bit of citrus, and a light presence of dried fruit, much like Roda Lacket.  The flavor is rather complex and develops the longer you have it in your lip.  The flavor starts off as a robust tobacco taste, and gradually light notes of dried fruit begin to mingle in.  There is a little bit of citrus but it's very mild.  The fruit/tobacco flavors are more apparent.  There is a little bit of pepper in the background, but it's not too overbearing.  Being a 12mg/g nicotine snus, it is a little stronger than your average snus, but it's not too intense.  If I had to describe this one, I'd say it's like a blend of Grov and Roda Lacket with a little citrus mixed in. 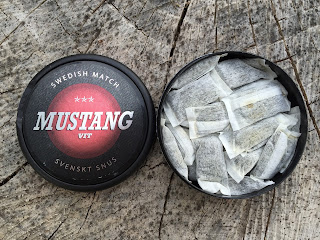 One thing you'll notice about this one is that it doesn't come in the star formation.  That is usually reserved for the more premium Swedish Match products.  The aroma is slightly different from the original portion, however.  The smell of citrus is more apparent, with just a little tobacco in the background.  The fruit aroma is there, but very light.  For white portions, these are surprisingly soft.  Being a white portion, the flavor is more mild than the original portion and takes a little bit longer to develop.  The tobacco flavor gradually comes on about the 10-15 minutes mark and comes through as a well rounded tobacco taste, but not very bold.  The dried fruit taste is very mild and stays in the background.  I also don't notice much citrus in the taste, which is interesting because I noticed it in the aroma. If I had to compare it to anything I'd say it's a cross between Grov White Portion and Roda Lacket (White Portion).  This snus doesn't really stand out and the flavor is very tame.  The Original Portion is vastly better than the white portion.

In closing, Mustang isn't a bad snus at all.  The white portion is rather mild in taste, but I found the original portion to be quite tasty.  It's definitely worth a try!
Posted by Chad Jones at 3:20 PM