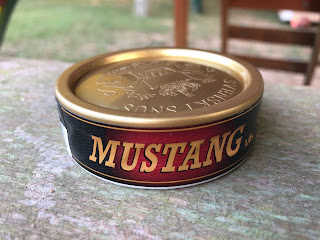 Mustang is an interesting snus. In 2015, Swedish Match launched this brand in three formats: Mustang Original Portion, Mustang White Portion, and Mustang Lös. In a completely rare move, Swedish Match announced they were discontinuing Mustang in 2017, but only the portion versions. They kept the lös version in production, which never seems to happen. The original and white portion versions were said to have been rebranded as Kaliber+ Extra Strong Original and White Portion, which launched in Spring of 2017. Mustang Los is a cheaper option from Swedish Match, costing only $3.10 per can. Compared to Grov Los, for example, at $4.17 per can.

Though it is a cheaper product, it doesn't have a cheap taste! The flavor description for this product says, "A powerful snus - Mustang is a snus with a clear tobacco flavor without being too salty or smoky. Available only as loose snus since Spring 2017. A dark and spicy tobacco character with clear elements of dried fruit and citrus, as well as some licorice and nypon (rosehip)." It comes in a 42 gram can with a nicotine strength of 10mg/g (1.0%). 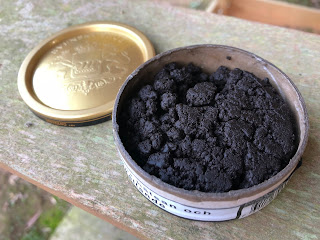 When you open a can of Mustang Lös you smell rich, dark tobacco smell with a mild fruity presence and just a slight hint of citrus.  The fruity presence is hard to explain, but I'd say it reminds me of a mix of dried cherry and dried lingonberry.  The tobacco is very easy to work with, as well.  Like most Swedish Match products, it handbakes like a dream - no tool necessary!  The rich, dark, robust tobacco flavor is front and center with Mustang.  There are mild hints of dried fruit which, much like the aroma, remind of a mix of dried cherry and dried lingonberry.  There's a little bit of citrus but it isn't the star of the flavor profile like with General, for example.  In the background I find there is just a touch of pepper.  There's also a light sweetness to it which may come from the rosehip.  Though the flavor profile mentions licorice, I don't taste any.  All in all, it's a really tasty snus!  I find the tobacco stays together pretty well in the lip, as is common of most Swedish Match loose products, and I can keep it in for about 45 minutes on average.  The nicotine strength, when baking a 1 gram prilla, feels just a touch stronger than regular strength.

For comparison purpose - if you mixed Prima Fint Los, Grov Los and some Roda Lacket Los and dropped in a little citrus, that's what Mustang Los tastes like.  It's definitely an interesting and unique flavor, and I'm glad to see Swedish Match hasn't forgotten the lös lovers out there!
Posted by Chad Jones at 4:45 PM