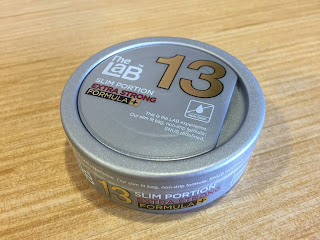 First came The Lab 01 and The Lab 02, then The Lab 05 and The Lab 06 (skipping 03 and 04, which we assumed were General Long and General Long Strong), then The Lab 06 and The Lab 07, then skipping 08, 09, 10 and 11, and most recently cameThe Lab 12. Then, an offshoot of The Lab Series came came,  The Lab Fresh: Lemon, Mint and Cool Mint. Now comes a new one, The Lab 13 Formula Plus Extra Strong Slim. Another very long product name, so we'll just call it 13 from now on. 13 is described as, "13 Formula+ Extra Strong Slim - the latest edition to the LAB family. A new and exciting snus, with a spicy tobacco character and flavors from sweet tropical fruit and red berries, also some almond and citrus! An extra strong portion-snus, with a rich tobacco character and a touch of exhilarant energy-drink." Clocking in at 20 mg/g of nicotine, this snus was designed, as most strong snuses are, for Norway. Apparently, Norwegians really dig strong snus and energy drinks. 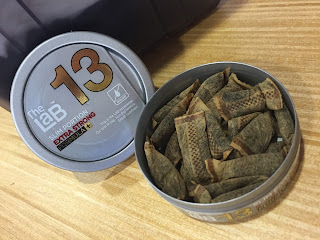 As is common of most Lab snuses, the portions are long, and in the middle between original/white portion - not dripping, but not dry, so they can still fly under the "Non-Drip" label.  I won't say they don't drip, but 99% of the time, I don't really notice much drip.  The aroma is very interesting, there's a smell of red berries and that tart aroma that comes through when you open an energy drink. The taste has a good tobacco base that has a little nutty hint to it, with a sweet/tropical fruit taste that starts off sweet and then turns a little tart. It's a pretty well rounded and very unique flavor, it even has a nice little burn to it and a little spice! The nicotine kick is quite strong, and even though this snus is an "energy drink" tasting snus, there aren't any added ingredients like past energy snuses have had, no caffeine, or any of that - just a strong nicotine kick to it, and perhaps a modification of the pH level to make the nicotine hit faster, because it does come on a little quicker than most snuses do. It does provide a little rush, that's for sure. So if you're into strong snus, and energy drinks - this is definitely something for you to try!
Posted by Chad Jones at 6:21 PM