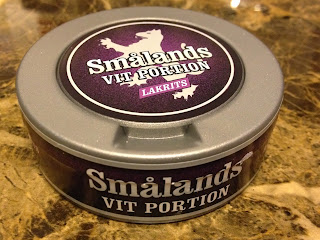 I recently picked up a can of Smaland's Lakrits White Portion from the Northerner for review. In early 2012 I reviewed their other offerings, Smaland's OP and Smaland's White Portion. I wasn't very impressed, going on to say, " This snus doesn't suck, I've had a lot worse, but it's just not that good. Definitely not something I'd want to try again. I don't really know why Skruf released these, because everything they've done other than this has been about perfect, but this one just doesn't meet their standard." I understand that the snus world is a lot like the cigarette world. Not everyone wants to spend a ton of money on snus, so these value priced brands are necessary. I just wasn't a fan of those two. Not all of them are bad, I enjoyed Kaliber Special Vit from Swedish Match and Lenny's Cut from GN Tobacco. 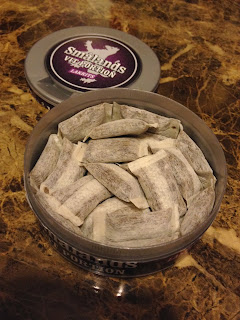 That being said, licorice snus and I have had a love/hate relationship. Some I dig, some I don't. Off the top of my head, the two I liked the most have been Oden's Lakrits and LD Black. When you open a can of Smaland's Lakrits, the aroma that comes through is straight up in your face black licorice. It smells like a black Jelly Belly mixed with paper, that's the only way I can think of describing it. The pouch itself has as much aroma as the snus does. The portions themselves are quite plump, but a little dryer than most white portions I've had in the past. The taste of this one is a very, very mild licorice flavor. It's almost like a small hint of licorice, and that's about it. The flavor doesn't grow too much, it's very basic and mild. There's a little salt balance in there, but very little to write home about. So that's Smaland's Lakrits White Portion. It's just kinda....meh. Not good, not great. But if you're into licorice and want a value priced snus, I suppose this would be one for you to try out.
Posted by Chad Jones at 10:44 AM