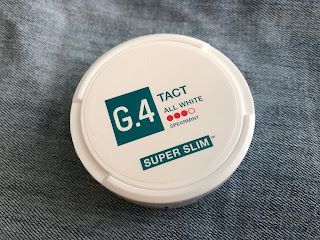 Swedish Match is a company that likes to break new ground, and with this product they appear to be doing it again. Back in May of 2016, Swedish Match released the super slim format with General G3 Mint Super Slim. Now, they appear to be doing another first, releasing G4 Tact which is the world's first super slim all white product. If you're new to the G4 line, this is how Swedish Match describes it: "Thanks to new technology, G.4 has been able to produce all white portions, with the same type of texture and feel as traditional snus, but completely without tobacco flavors. We call this format All White. Through a combination of plant fibers and a small amount of white tobacco, G.4 is a white snus before, during and after use. The portion has a soft fit, low drip and delivers a similar nicotine experience as traditional snus from Swedish Match." 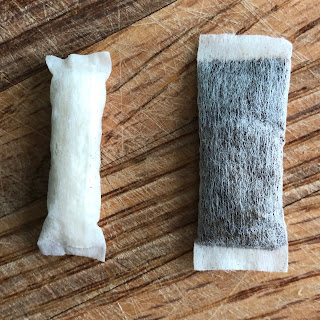 So, how slim is super slim?  Looking at this photo comparing a regular slim white portion to a super slim all white portion, you can see it's a much slimmer portion format.  Snus is already discrete, but you could say this format is super discrete.  I used to joke around and call them nicotine toothpicks, but now that I've reviewed Nicotine Toothpicks, I don't really make that comparison anymore.

When it comes to G4 Tact, this is how Swedish Match describes it: "With G.4 TACT, we are the first in the world to launch a Super Slim product in the All White segment. TACT is our most discreet slim product so far and is designed to take as little space as possible, both in the mouth and in the pocket, but without sacrificing taste. This snus has a bright and spicy character with clear elements of spearmint."  G4 Tact comes in a 10.6g can with 20 portions, weighing 0.53g each. The nicotine content is 19mg/g (1.9%), which breaks down to 10.07mg/portion.  The can is also slightly smaller than a regular snus can in width and height, but not much - maybe a few mm. 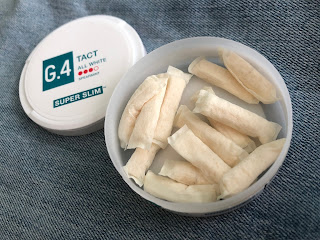 When you open the can, the aroma is a fresh, smooth, lightly sweet smell of spearmint. The super slim portions are, of course, super slim. They feel lighter than a regular snus portion in the lip, but they don't feel as small as mini portions. Being a mint product, you'll encounter the familiar cooling sensation when you put a portion in the lip.  The flavor is pretty nice if you like spearmint.  It's a gentle, lightly sweet taste of spearmint.  I really like how smooth the flavor of this one is.  The nicotine strength on this one feels to be around the regular strength level.  As it is only 10.07mg/portion, I didn't expect it to be too strong.  The flavor, on average, lasts up to about 45 minutes.

In terms of the G4 line, I think this one might be my favorite.  I really dig the smooth spearmint flavor, the slimmer can, and the super slim portions!