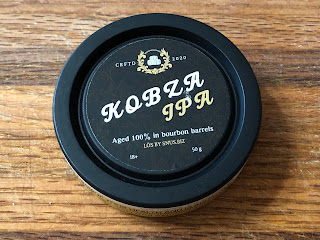 It's no secret that IPA is my favorite style of beer. And nothing is better than when snus companies mix IPA and snus. Conny Andersson, a good friend of mine, made a few IPA products. With Mellgren's, he made Mellgren's IPA Single Cut Batch 1 in July of 2015, as well as Mellgren's IPA Single Cut Batch 2 and Mellgren's IPA White Portion in February of 2016.  That was followed up with a product with a wider release - Hope and Glory IPA Snus in October of 2016.  Now, Snus.biz is taking a stab at making an IPA snus with their new Kobza IPA Snus! 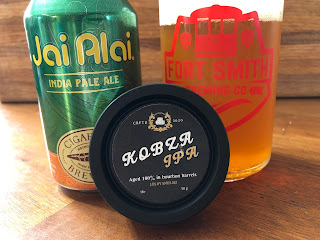 This snus is inspired by Lagunitas IPA, a personal favorite of mine.  I don't have any in the house, so I'm actually pairing this with Jai Alai IPA, my personal favorite IPA.  I figured it would be good to test it's pairing ability with a different beer anyway.

When it comes to this snus, the flavor description says, "The flavor was inspired by Lagunitas IPA - rich, citrusy, spicy, and with a pronounced hop bitterness, along with a floral aroma and caramel aftertaste.  To add Ukranian character, Transcarpathian hops were used, along with honey from wild bee colonies in Halyčyna.  Brazilian Bragança, Turkish Basma, Moldavian Semioriental and Ukrainian Virginia tobaccos were used for a rich, complex tobacco base.  The snus was aged in bourbon oak barrels."  Each can comes with 50 grams of lös snus, just like the good old days!  The nicotine strength is between 8mg/g to 14mg/g. 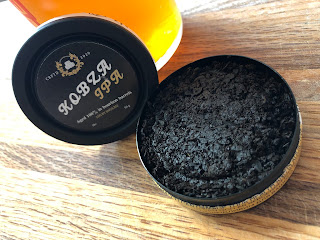 When you open the can, a light hoppy presence greets you, along with notes of honey and a gentle, but tart tone of citrus. The tobacco is in the combo grind, which is a mix of fine and coarse grinding. The tobacco is moist, and has a quick release of flavor. Hops greet you in the flavor profile, followed by honey, and a light tone of citrus. The tobacco base is robust, spicy, and dark. There’s also a mild caramel tone in the background. The nicotine level feels to be a little less than strong, and the flavor lasts around 45 minutes on average.  Now, in terms of pairing - it works great with beer.  The heavier elements of the flavor are offset and complimented by the taste of the IPA.  But it's not just a pairing beer, I also tried it on it's own without beer, and it tasted great!

So whether you love beer, or don't love beer, this is a must try.  It's a complex, tasty snus!
Posted by Chad Jones at 8:49 AM