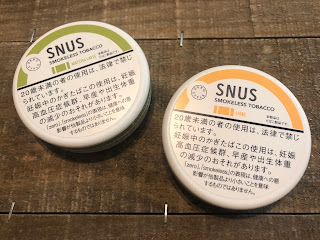 Nordic Snus AB and JTI have released two new products in the ZeroStyle line: Matcha Latte and Ume! The ZeroStyle line, if you're not familiar, is a line of snus sold in Japan.  The first ones I reviewed, Mint and Regular, launched in 2017.  In November of 2018 they followed with Vanilla and Cool Mint.  Then, In June of 2019, they followed with Spice and Black Menthol.  When these products first launched, this is what JTI said about them: "While the majority of consumers in Japan enjoy tobacco in the form of cigarettes, demand is increasing for tobacco products designed to be used in places where consideration needs to be given for those nearby. Zerostyle Snus are snus whose taste, aroma and portion size have been specially developed by JTI to meet the preferences of Japanese consumers." 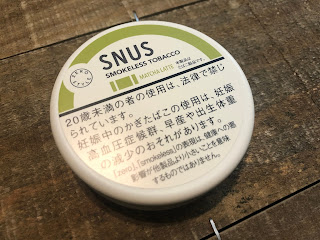 Flavor Description:  "Matcha Latte flavor with mellow sweetness."
Can Contents: I counted 20 portions in the can, and I weighed them out to be 0.3 grams each which would mean a 6 gram can.
Nicotine Strength:  I couldn't find this listed online anywhere. 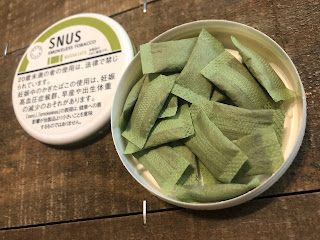 I had to do some research, because I have no idea what a Matcha Latte. Matcha is a finely ground powder made of green tea leaves. A Matcha Latte is a combination of matcha powder, hot water, milk, and honey.  As a lover of green tea, I found myself quite excited about this one.  The aroma of this one is a mellow green tea smell with some creaminess to it.  It's not overly sweet smelling, either.  The portions are....green.  I've never seen that before.  They feel like regular white mini portions, but just...green.  It's interesting!  The flavor is actually quite enjoyable.  It has a warm, green tea presence to the taste.  There's a mild creaminess to it, as well.  I don't notice much sweetness, which is surprising and enjoyable.  When I have two in, the nicotine strength feels comparable to regular strength snus.  The flavor, on average, lasts about 35-40 minutes.  I really enjoyed this one.  Honestly, if I could get this from my regular snus store, I'd definitely buy more of it. 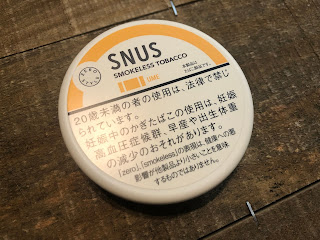 Flavor Description:  "Plum flavor with a smooth menthol feeling."
Can Contents: I counted 20 portions in the can, and I weighed them out to be 0.3 grams each which would mean a 6 gram can.
Nicotine Strength:  I couldn't find this listed online anywhere. 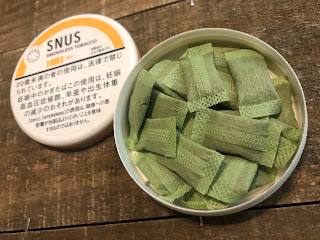 I’m not familiar with Ume, so I had to do a little research on this one, as well. Ume is a green plum that is native to Japan. They’re used to make umeboshi (pickled plum), and Japanese plum wine.  They are said to usually taste salty, and quite sour.  The aroma of this one is a sour-ish smell with hints of menthol.  The portions are again, green.  They feel like regular white mini portions.  When I put one under the lip, I feel a mild burn, which gives way to a cooling presence.  The flavor is a mild, fruity taste.  It's slightly sweet, slightly sour.  There's a little saltiness to it, but not too much.  There's also a fresh character to the taste from the menthol.  When I have two in, the nicotine strength feels comparable to regular strength snus.  The flavor, on average, lasts about 35-40 minutes.  This one was certainly an interesting flavor.

I really enjoy reviewing products from different markets, especially these Japanese ones.  While I can't personally order these where I live, I imagine Japanese consumers will enjoy them.  The Matcha Latte one was absolutely delicious.
Posted by Chad Jones at 1:50 PM