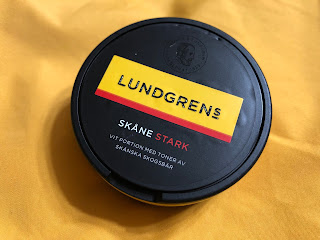 It's been 5 years since Fiedler and Lundgren launched Lundgrens Skåne Vit, and it's proven itself to be a pretty popular product. It's one I've enjoyed for several years now, as well as their Lundgrens Norrland, which I hope is next to get a stark version.  This product just launched a few days ago as of the writing of this article, and I've been rather surprised with the amount of inquiries I've had to review it.  So, here we go!  The flavor description of this one says it has a taste of "classic tobacco with hints of forestberry".  Each can weighs 20.4g and has 24 portions, for 0.85g portions.  The nicotine strength is 13mg/g (1.3%), which breaks down to 11.05mg/portion. 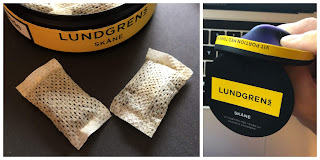 Another thing I really like about the Lundgrens line is how innovative it is.  On the left, you'll see the perforated portion.  This is a portion format that Lundgrens created which has little holes in it.  So, you get a quick release of flavor (like an original portion) but also a long lasting flavor (like your regular original portion)!  On the right, you'll see their other creation which I think is the greatest innovation in years.  The FlexLid is a rubber catch lid which actually expands as you add more portions to it.  If you're someone like me who uses the catch lid often, this is a great creation! 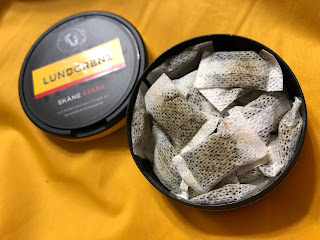 If you've ever had Lundgrens Skåne before, this tastes just like the regular strength version, but with more nicotine. When you open the can, the aroma of spruce and berry comes through. It’s a mild berry smell, like a dried/mild cranberry/cherry mix. The perforated portions are pretty soft, and have a quick release of flavor. And in case you’re wondering, no, tobacco doesn’t come out of the holes into your mouth. The flavor is a mild berry taste, like the aroma, and it reminds me of a dried/less sweet/muted cranberry/strawberry taste. I pick up hints of spruce, a mild herbal character, and a light taste of tobacco. The nicotine on this one feels to be right at the strong level, and the flavor lasts up to an hour on average!

If you like Lundgrens Skåne Vit and want a version with more nicotine - here you go!  Same great flavor, but with more kick!
Posted by Chad Jones at 4:25 PM