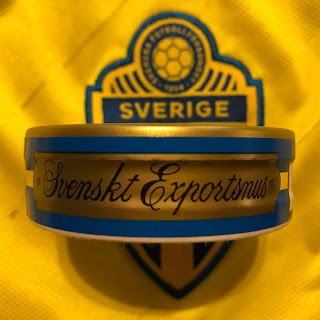 Swedish Match has resurrected another lös product, Svenskt Exportsnus! This is probably the most literal snus product I've reviewed before, because it is Swedish ("svenskt"), and it's one I am reviewing in the US that was exported to me ("exportsnus"). So, the name is extremely fitting.  This was a snus that was originally sold from 1970-1998, and for this return Swedish Match has made 75,000 cans.  Needless to say, it is a limited edition.  Like the other two, once they're gone - they're gone!  When this one launched in 1970, there was a growing demand for snus products with a milder taste character, and this one was released to meet that demand. 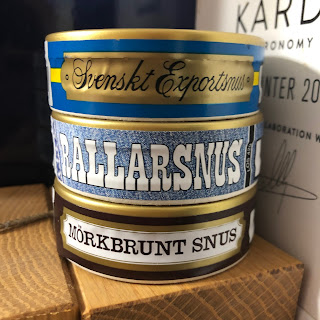 This is the third in a series of products resurrected by Swedish Match. Mörkbrunt Lös came in late 2018 to kick off this series, followed by Rallarsnus Lös in the summer of 2019. Now, Svenskt Exportsnus has joined the series to close out 2019. Robin Rydgren, Brand Manager at Swedish Match, had this to say about this release: "We have now re-launched three classics from the past, Mörkbrunt Snus, Rallarsnus and now Svenskt Exportsnus. The idea was to also do something for the approximately 200,000 lös snus users found in Sweden, since much of our product development was focused on portion products. It's been a really fun project where we dusted off old recipes and tried to emulate the originals as best we can." 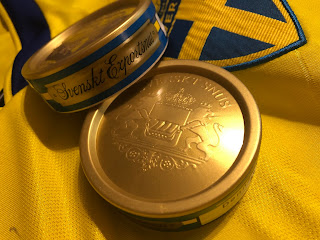 The flavor description for this one says, "Dark tobacco character with elements of rum raisin, smoke and jasmine." Each can weighs 42 grams and has a nicotine content of 7.5mg/g (0.75%).  The can looks like other Swedish Match lös cans, with the gold lid and the paperboard can.  The design emulates how Svenskt Exportsnus originally looked, but in a more modern format. 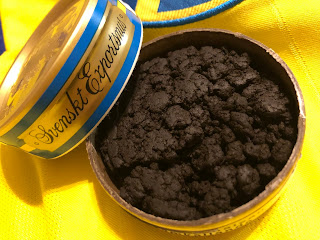 When you open the can, the aroma is a dark, but mild, tobacco character with a hint of smoke.  The lös tobacco itself is soft, moist, and very easy to handbake, much like with other Swedish Match lössnus!  The flavor of this one is relatively mild, but dark in nature.  There is a light hint of smoke, but it's not too overly smoky.  I didn't really get any rum, raisin, or jasmine in the flavor profile.  It seems to taste like a darker Göteborgs Prima Fint.  I can usually keep a prilla in for around 40-50 minutes, and it has a long lasting flavor.  The nicotine feels to be around the regular strength level with a 1-1.5 gram prilla.  I enjoyed this one, and I'll finish the can, but it doesn't stand out by any means.  I was really hoping the rum and/or jasmine flavors would be more apparent.  A friend of mine grabbed this for me from SnusBolaget.se, but I imagine web stores that ship to the US will eventually pick it up as well!

Update:  SnusCENTRAL.com just added this to their e-store, so it is now available for a limited time.  LINK:  https://www.snuscentral.com/loose-snus/1064-Svenskt-Exportsnus.html
Posted by Chad Jones at 9:57 AM