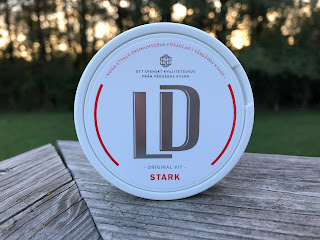 If you've read my reviews long, you know I'm a big fan of LD. In my opinion, it is #2 behind General for best traditional flavored Swedish Snus product. In February of 2018, Nordic Snus launched LD Stark Original, and now they've followed it with LD Stark Vit (White)!  Not only that, but with this product (and the regular strength LD White), Nordic Snus has launched a new white portion material, which I'll talk about momentarily.  The flavor description for this one says, "LD White Strong Portion snus brings the traditional tobacco/bergamot/pepper LD flavor profile to a high nicotine white portion."  LD White Stark comes in a 16g can with 20 portions for 0.8g portions.  The nicotine content is 14mg/g (1.4%), or 11.2mg/portion! 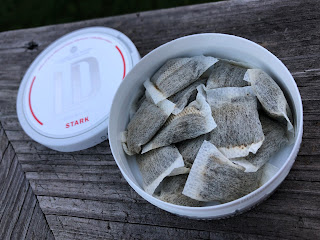 When you open the can, the aroma is a mild, clear smell of citrus. The portions, as I mentioned before, are soft. I notice they are much softer than I remember from the last time I had LD White Portion; they feel great in the lip! The flavor is a mild flavor of citrus accompanied by a mild tobacco character. It's not as tart as other bergamot snus products, and it's not as peppery, either. LD Stark Vit has a very well balanced flavor, perfect for all day use. The nicotine on this one feels to be stronger than a regular strength, but it isn't too over the top. The flavor also lasts quite a while; usually I can keep these in for a little over an hour!

LD is a budget line, but in my opinion it doesn't have a budget flavor.  It's a great alternative for those wanting to save a few bucks, but not sacrifice in quality!
Posted by Chad Jones at 6:37 PM