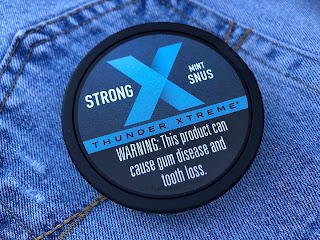 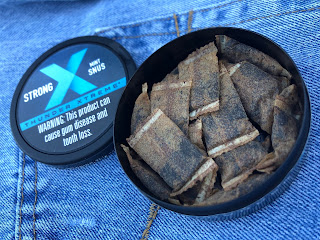 Going into this one, I assumed it would taste just like Thunder Frosted, as that used to be sold in the US. But, it does not! It actually reminds me a lot of one of my favorite mint products - Thunder Cool Mint!  The aroma is a sweet, sharp smell of peppermint.  But, it's also smooth, if that makes any sense.  The portions are plump, super moist, and really comfortable in the lip.  Being a mint product, you'll get a nice cooling presence in the lip, as well!  The flavor of this one is delicious, much like Thunder Cool Mint.  It's a sweet, present, smooth taste of peppermint.  It's sharp, but not overly sharp.  The nicotine on this one feels stronger than a regular strength, but not overly strong.  The flavor, on average, lasts about 45 minutes.

I think American snus fans are really going to like this one.  Especially those who are quitting smoking and want something stronger than the average mint snus.  If you like General Mint but want something with a little more nicotine, check this one out!
Posted by Chad Jones at 2:24 PM