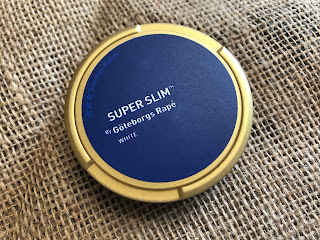 Swedish Match has released another "prototype" snus, as they are calling them - this one takes the popular flavor of Göteborgs Rapé and puts it into the super slim format, as well as a smaller/slimmer can. If you remember, last month I reviewed a new slim can GR XRANGE, and this can seems to be about the same size as that one. That one, and this one, aren't the first time Swedish Match has done a prototype. They released General 22 and Göteborg's Rapé 22, which was a prototype that eventually became General One White and Göteborg's Rapé One White. So, I imagine this one will eventually be released if it's popular enough.  This is also the second time they've released one of their main line products in the super slim format.  Back when they released G3 Super Slim, I was curious if we would eventually see this one. 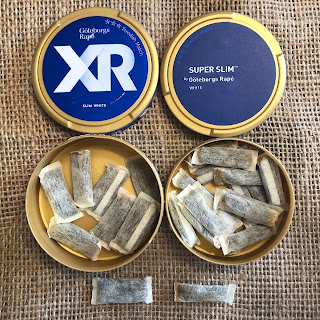 Here is a comparison between GR XRANGE and the new GR Super Slim.  You can see the can is slightly smaller, it's also slightly slimmer.  And looking at the portions you can see they are, of course, slimmer.  If this becomes a production snus, the can design won't look like this, either.  It'll probably get its own design, much like General 22 and GR 22 did when they became the ONE products.  The description for this one says, "The well-known Göteborgs Rapé flavor is now being launched in a new innovative format for - Göteborgs Rapé Super Slim. The new, discreet format does not compromise with the experience and comes in a smaller box that takes up less space in your pocket.  Light and spicy tobacco character with clear elements of lavender and juniper, as well as light hints of  wood and citrus. A long, narrow portion with a slim fit that is dry on the surface with moist content for low drip and a long lasting flavor."  Each can weighs 10.6g and has 20 portions, for 0.53g portions.  The nicotine content is 13.5mg/g (1.35%), but actually 7.15mg/portion.  So technically a strong, but not really. 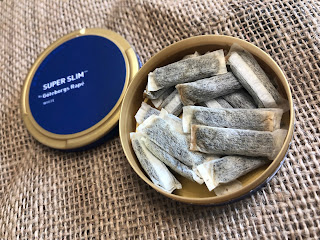 This product is basically the same as regular GR White, or GR XR White, except the portions are super slim. The aroma is a present smell of juniper, a light touch of citrus, and some mildly sweet floral notes. The portions are super slim, and very discrete in the lip. But they're not so slim that they get lost or anything, not like with mini portions. Like with regular GR White, juniper is the most present component of the flavor profile. In the background you'll find a very light touch of citrus, accompanied by some light herbal tones, and light floral notes. I find the flavor on this one generally lasts up to about an hour. The nicotine does feel a touch stronger than regular strength, but not too strong. I'd call it a strong-light.

I enjoyed this one.  I can't say I'd switch because I do like a more plump portion.  But if you're into the super slim format and like the GR flavor, you'll probably love this one.
Posted by Chad Jones at 6:34 PM