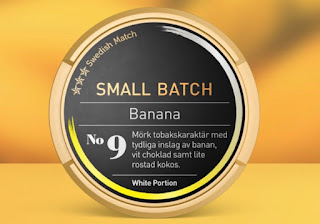 The flavor description for Small Batch 8 says “For the development of this product, we have gained inspiration from the taste balance between the banana and chocolate. Mature banana meets coconut and white chocolate. A rich and full-bodied taste that still has the undertones of tobacco."

It's available now on the Swedish Match e-store.  As usual, this product isn't available to the US.
Posted by Chad Jones at 6:14 AM