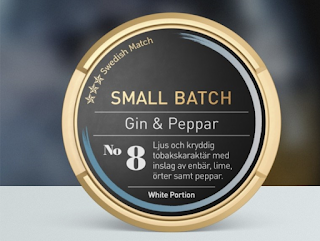 The flavor description for Small Batch 8 says it "has a light and spicy tobacco character with hints of juniper, lime, herbs and pepper. The ingredients have been formulated to give a taste similar to gin."

It's available now on the Swedish Match e-store.  As usual, this product isn't available to the US.
Posted by Chad Jones at 8:32 PM