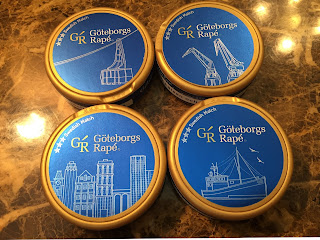 Swedish Match is back again with another limited edition product from Göteborg's Rapé! I've written about quite a few of them in the past, but this one is different in that it is a different flavor, limited edition cans, and 4 designs inspired by local places in Sweden! Calling it Göteborg's Rapé Local Edition, Swedish Match says "Göteborgs Rapé is visiting new cities with a temporary release! The design is inspired by local motifs from the cities of Stockholm, Åre, Göteborg and Strömstad, and the content is based on Göteborg Rapé White Large, but with rosemary flavor for extra spice."  They have released limited edition designs in the past for GR, but these come with a special flavor designed for this release, as well! The flavor description says, "Light and spicy tobacco character with clear elements of herbs, rosemary and lavender, as well as some citrus." These products come in a 21.6 gram can with 24 portions, for 0.9 grams each. The nicotine strength is 8mg/g (0.8%), which breaks down to 7.20mg/portion.

Now, for the readers outside of Sweden, I wanted to explain the designs on each one of these.  A special thank you to Sebastian Koss, a follower of the Snubie.com Facebook Page who provided insight into each one of these designs. 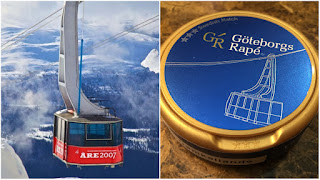 Åre is known for skiing, and is one of the leading Swedish ski resorts.  For this design they used a ski lift, which makes sense, given that's what Åre is known for. 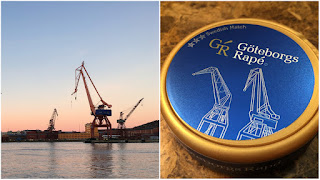 Of the 4 designs, this is the only Swedish city I've been to.  Göteborg is a port city, so for this design it looks like they used a crane for shipping containers. 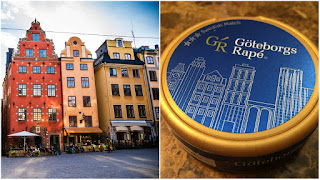 Stockholm has a lot of beautiful and historic buildings, so it looks like for this design they focused in on the architecture of the city with this can design. 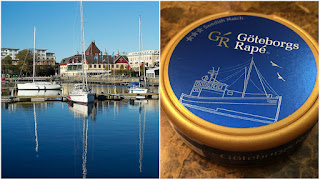 Strömstad is an old fishing village, I was told, so they put a boat on this can.  I also like the two seagulls on the can, it's a nice touch. 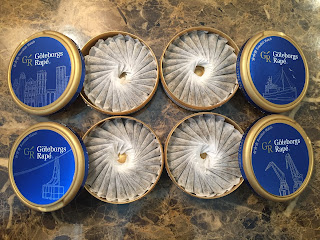 So, we've spent a lot of time talking about the cans - how about the snus? I'll say this, it's an interesting take on Göteborg's Rapé! When you open the can, the aroma that greets you is a present herbal smell. And yes, you can detect the rosemary! I also notice a light, smooth hint of lavender and a gentle presence of juniper. The portions come in the usual star formation that is common of Swedish Match's premium white portion products and they feel great in the lip.  The flavor of this one is very interesting.  In this one, you taste more of the herbal flavor in the front, and the juniper taste is in the back.  The rosemary taste is pretty present, and it actually works well with this snus.  I cook with rosemary a lot so I was curious if rosemary would work with a snus flavor, and it does!  The juniper flavor is right behind the herbal taste, accompanied by a very light touch of citrus, and a lightly sweet lavender taste.  It's interesting, but in the regular GR White Portion, I don't taste lavender.    However, in this product, I do.  Also, after having the portion in for a while, you'll also notice a mild tobacco character in the background.  This snus is almost like a combination of Tre Ankare White Portion, which is a tobacco tasting snus with herbal notes, and the traditional taste of Göteborg's Rapé.  It's very interesting, and quite good!  The flavor lasts a good amount of time, up to about an hour.  The nicotine content feels to delivery the regular nicotine strength, as well.

All in all, it's a pretty interesting tasting snus.  It's very unique.  If you like Göteborg's Rapé,, this is an interesting twist on that flavor, and well worth trying.  If you're not a fan of GR, buy it for the limited cans, because they're really neat. Also, a special thanks to our friend Michael Kristensen for finding these products for us!
Posted by Chad Jones at 2:38 PM