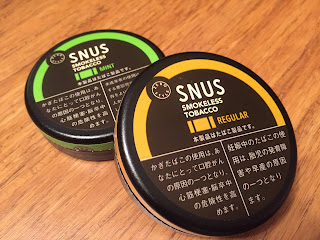 I've had my eyes on these products ever since they were launched by JTI in June of 2013. When they first launched, they came in square packets/pouches, but now come in regular round cans.  I've actually had quite a few people ask me to review these, so I figured it was time to try out this ZeroStyle snus! This is what JTI had to say about these products: "While the majority of consumers in Japan enjoy tobacco in the form of cigarettes, demand is increasing for tobacco products designed to be used in places where consideration needs to be given for those nearby. Zerostyle Snus are snus whose taste, aroma and portion size have been specially developed by JT to meet the preferences of Japanese consumers." 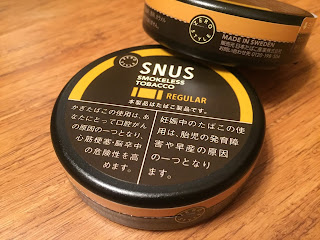 Going into these products, I did not have much background information, nor can I translate what it says on the can.  In these reviews I'll mainly focus on what I can observe - the aroma, taste, and nicotine. The flavor for this product is described as "roast, burnt sugar and nutty tone with sweetish taste."  When I read that I was intrigued, because that certainly isn't a flavor profile common on the Swedish snus market! 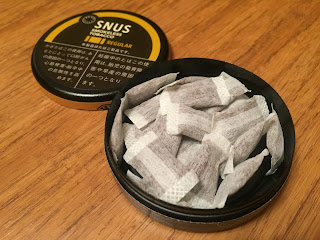 When you open the can, the aroma that greets you is a mellow tobacco smell with a very light, almost caramel-like hint to it. The portions are the white mini type, and seem to be slightly less moist than your average white portion snus. This one has a very interesting taste. The flavor is a mild tobacco taste with a caramel-type hint to it. The flavor also comes through with a light sweetness to it, as well. There is a nice, nutty hint that comes through the longer you have the pouch in your lip. The flavor lasts around 45 minutes before starting to fade out. I don’t know what the nicotine content is, but when I use two portions it feels to be about regular strength, so I’m assuming it’s anywhere between 4mg/g to 8mg/g in strength.  This one had a very interesting and unique flavor, and I can say it's like nothing else I've ever tasted before! 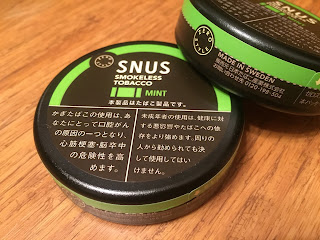 As with ZeroStyle Original, I didn't have much information going into this product, either.  I can't translate what's on the can so, as with the last review, I'll be going on simply what I can tell:  aroma, taste, and nicotine.  This product is described as having a taste of "menthol, with Green Apple fruity notes and a sweet taste."  This one sounded interested, because most snus products don't incorporate apple into their mint flavor profile! 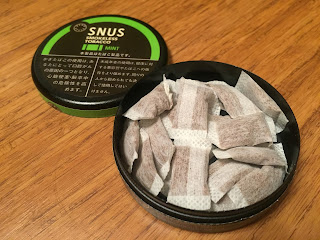 When you open the can, the aroma seems to be an almost equal blending of green apple and menthol. The portions are the white mini type, and they seem to be a little less moist than your average white portion snus product. When you put a portion in the lip you’ll encounter a nice cooling sensation, which is common of most mint/menthol snus products. The flavor is quite interesting! The flavor of apple is very present, and it seems to be accompanied by an almost nutty-like hint in the background. The menthol flavor sits behind the apple, and works really well with the freshness of the apple flavor. There is a touch of sweetness to this snus, but it’s not too sweet. The flavor lasts up to about the 45 minute mark before it starts to fade out. I’m not sure what the nicotine strength is, but when I use two it feels to be about regular strength. Since these are mini portions, I would guess the nicotine content is anywhere between 4mg/g and 8mg/g.  Like the original product, this one had a very unique flavor.  It's hard to compare to any snus product I've had before.  The closest thing I can think to compare it to is Offroad Apple White Mini, but with added menthol.

These were both very interesting products, and I'm glad I got to try them.  I'm excited to see snus pushing into Japan, because it is always great to see safer alternatives to smoking be marketed and sold in places where they may not have existed before.  I hope these products will do well in Japan and will help more people quit smoking by switching to snus, a much safer way to enjoy nicotine!
Posted by Chad Jones at 1:35 PM