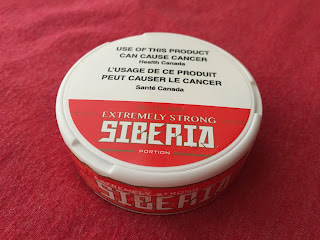 I recently found out that GN Tobacco was expanding into Canada and selling two products in the in the land of Bob and Doug. I reviewed the Siberia products GNT has released on the Swedish Market: Siberia Brown, Siberia Red, Siberia Blue, and Siberia Blue Slim. But I'm more excited to try this product than any of those.  In Canada, there is apparently a ban on flavored snus.  Which means this product has no added flavor.  I know that may sound like a bummer to some people, but to me, it got me excited.  It seems like every snus I review has some added flavor, but this one doesn't.  And that's something I've been looking forward to, a snus with no added flavor. This snus comes in a 15 gram can with 19 portions, which breaks down to 0.79 grams per portion. The nicotine content is 36mg/g (3.6%).   Breaking that down per portion you'll find a nicotine content of 28.42mg/portion. 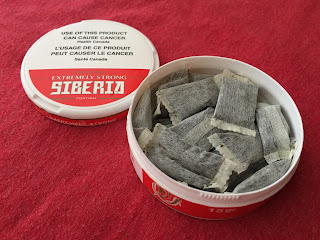 When you open the can, the aroma comes through is a mild tobacco smell. What's interesting about the aroma, however, is that it comes through in a sharp and stinging way. I find that interesting as there isn't any mint in this snus. Being a white dry snus, the portions are going to be dryer than your average white portion. I also experience a very mild burn in the lip. Not as strong as I noticed with regular Swedish Siberia snus, but it's still there. The taste is a mild tobacco taste, but I noticed it to be more present than in the Canadian Lenny's Extra Stark White I reviewed earlier today. The tobacco taste also seems to be more sharp and focused. I notice a mild salt balance, but no pepper. The nicotine kicks in at about the 5 to 6 minute mark and it hits hard. It's not as strong as the Swedish Siberia snus, but it still hits quite hard! The flavor lasts a good amount of time, as well. It does get more mild at about the 30 minute mark, but I've been able to keep this snus in for up to an hour. I know to some people "no added flavor" may not sound exciting. But to someone like me, I love it. "No added flavor" is something the snus world needs more of. I'd definitely suggest trying this product if you're a fan of tobacco centric snus and want a snus with a high nicotine content and a mild tobacco taste.
Posted by Chad Jones at 5:49 PM