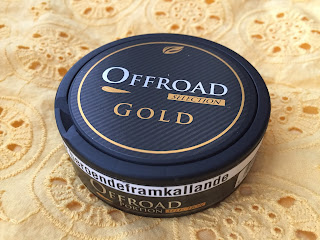 I originally reviewed Offroad Gold in April of 2015. I enjoyed it and found it to be one of V2 Tobacco's better products. In November of 2016, V2 Tobacco announced they would be discontinuing several products. One of those was Offroad Gold (Original Portion), but this one would be brought back after being reformulated. V2 described this product as having a "classic tobacco taste with hints of bergamot." This product comes in a 12 gram can with 18 portions, meaning 0.66 gram portions. The nicotine content is 8mg/g (0.8%) or 5.33mg/portion.  Going into this one I was curious about trying it, because I didn't think the flavor of the original Offroad Gold was that bad to begin with. 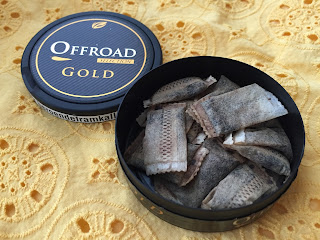 When you open the can, the aroma that comes through is a bold, fresh smell of citrus and a mild hint of tobacco. The portions are a little smaller and lighter than the average snus portion, but I didn't notice them to feel too lacking in the lip. I noticed more pepper in the old version's aroma; in this one I didn't pick up much pepper in the smell. The taste is quite good. For a budget brand like Offroad, this snus packs a quality taste. The citrus taste is very present, and accompanied by a mild taste of tobacco. I don't notice as much pepper in the flavor profile as this one as I did with the former Offroad Gold product. The bergamot flavor comes through in a very pleasant manner; it is light and airy and balances very well with the mild tobacco character. If I had to compare this to anything, I would say it reminds me of an old favorite of mine - Olde Ving Original Portion by GN Tobacco.  The nicotine strength feels about the regular strength even though it is a little lower, at 5.33mg/portion.  The flavor lasts a decent amount of time, mellowing out at about the 30 minute mark but lasting to around the 45 minute mark.

I would say the main difference I notice is that there isn't as much pepper in the taste or aroma of this one.  The citrus flavor seems about the same, and the tobacco taste seems to be a bit more dialed back than I noticed in the former version.  But all in all, I really enjoyed the taste of this one.  If you're a budget conscious snuser and enjoy traditional flavored Swedish Snus products, this one is worth a try!
Posted by Chad Jones at 8:00 AM