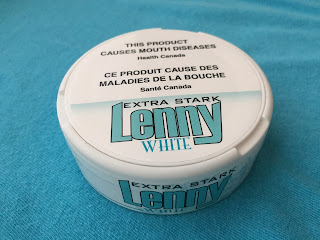 I recently found out that GN Tobacco was expanding into Canada and selling two products in the in the land of Bob and Doug. I reviewed the Lenny's products GNT has released on the Swedish Market: Lenny's Original Portion, Lenny's Los and Lenny's Stark White. But I'm more excited to try this product than any of those.  In Canada, there is apparently a ban on flavored snus.  Which means this product has no added flavor.  I know that may sound like a bummer to some people, but to me, it got me excited.  It seems like every snus I review has some added flavor, but this one doesn't.  And that's something I've been looking forward to, a snus with no added flavor. This snus comes in a 13 gram can with 13 portions. The nicotine content is 26.9mg/g (2.69%). Since it’s 1 gram portions, that means it breaks down to 26.9mg/portion. 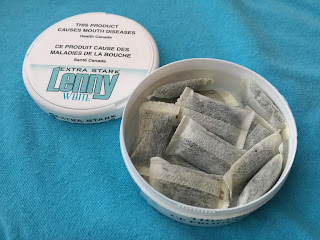 When you open the can, there isn't much smell at all. It's a very mild, light tobacco smell. The portions are plump and soft to the touch. The tobacco does seem kind of compact, so I just fluffing them to loosen that tobacco up a bit. The taste is a really mild, gentle, pleasant tobacco taste. I do taste salt, but I don’t taste any pepper. The nicotine is quite strong, it hits in about 8 minutes and provides a nice nicotine kick. It’s strong, but I don’t find the increased nicotine to be unpleasant. I don’t do a lot of strong snus, so that was pleasantly surprising.  The taste lasts a good amount of time, up to about an hour.  It's a relatively mild, but it still kicks around for a good amount of time.  I know to some people "no added flavor" may not sound exciting.  But to someone like me, I love it.  "No added flavor" is  something the snus world needs more of.  I'd definitely suggest trying this product if you're a fan of tobacco centric snus and want a snus with a high nicotine content and a mild, pleasant flavor.
Posted by Chad Jones at 5:42 PM